Early (6th-11th century) Byzantine Coinage
is far too numerous to cover comprehensively
on just this one page-books are devoted to it
-but here are a few samples:

When the capital of the Roman Empire formally transferred to Constantinople from Rome in 330AD, a new Rome arose from a provincial city in the Eastern half of the Empire. In just a few short years it would rival, and very soon thereafter eclipse, the original. When most of the Western half of the empire gradually was overrun (and fell) to groups of barbarians from outside and within during the next 150 years, Constantinople became the center for classical culture. The Byzantine Empire slowly evolved, being changed by the emergence of Medieval Europe to the West and of Islam to the East and South. In spite of the pressures from these potential enemies, the essential culture of early Byzantium preserved many Roman traditions, particularly in art and in architecture, as well as other applied arts, such as coinage. Moreover, the Christian Orthodox faith developed and grew strong, as it moved away from the western Faith; and, despite (or perhaps because of) the ever present disputes about the role of iconography in worship, we can see the Eastern Orthodox Faith worked out in its coins. see generally http://www.liturgica.com/html/litEOLitIcon.jsp and http://www.aidanorthodox.co.uk/Journeys/journeys.htm 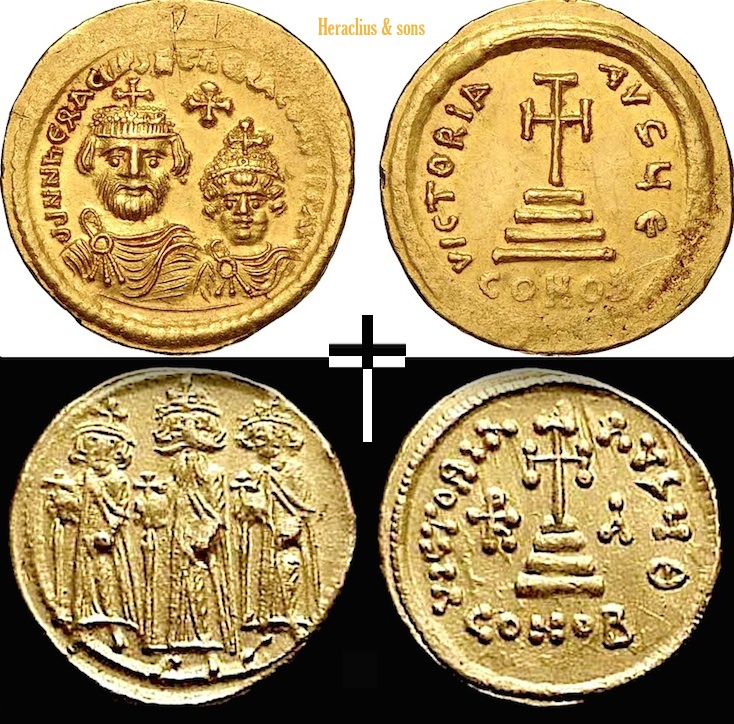 March 21, 630 (some report the date as the 20th): Roman Emperor Heraclius restored the True Cross, which he had recaptured from the Persians, 13 years after its theft. The legend of the True Cross begins in the year 326, when it was discovered by the mother of Constantine I, the Empress Helena. http://web.archive.org/web/20100719065816/http://www.philipresheph.com/.../holycross.htm 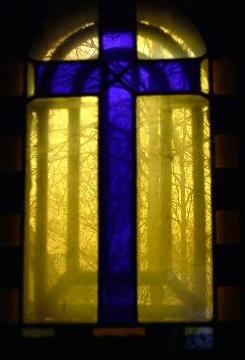 The cathedral treasury at Sens, one of the richest in antiquities in France, contains a fragment of the True Cross presented to it by Charlemagne. In 1248, inspired by a pilgrimage to Sainte-Chapelle (the location of a piece of the True Cross in Paris), Bishop Hugues de la Tour began work on a new cathedral at Clermont. Indeed, pieces of the relic were claimed all over Europe. August 18th is the feast day of Saint Helena, the mother of Constantine the Great. http://missel.free.fr/Sanctoral/08/18.php In 327-328 Helena made a pilgrimage to the Middle-East to walk in the footsteps of Christ. She initiated the building of several Christian churches on sites she determined to be sacred according to trusted traditions of the area. During her journey she is credited by many for the discovery of the True Cross. This relic was venerated in the Church of the Holy Sepulchre in Jerusalem by the end of the 340's. Helena died shortly after her journey. She was later made a saint in both the Eastern Orthodox and Roman Catholic Churches because of her awesome discoveries, her piety and her widespread charity. http://www.newadvent.org/cathen/07202b.htm

On the death of Leo IV, the widowed Irene assumed the regency of the Empire on behalf of her son Constantine VI (780-797). In her mind he is too weak and worthless to rule. Irene had him deposed and blinded, and she then ruled in her own right. She is the first woman to rule in her own name (797-802). Despite having reduced taxes and providing generous gifts, following a palace revolution, she left office in exile.

Basil I, a peasant from Macedonia, rose from groomer in the imperial stables to co-emperor under the patronage of Michael III. He murdered his mentor in A.D. 867 and founded thereby the Macedonian dynasty. Basil for all his moral faults becomes an effective ruler; his armies were successful against the Arab tribes, his diplomacy kept the Bulgars at bay. Late in his lifetime he began a revision of the great legal text, the Codex of Justinianus.

In order to secure his dynasty, Basil made his sons co-emperors, most often depicting his eldest and favorite son, Constantine, on the reverse. According to the usual conventions of imperial portraits, with Basil identified as the senior ruler by his scale, position on the left, and the more ornate garment (the loros), if the two appeared together. Constantine died prematurely in A.D. 879 and Basil fell into a deep depression. Leo and Alexander (also his sons) were portrayed with him after Constantine's death. Basil died in a hunting accident in 886.

John I (969-976 AD-coin is the two views to the far left above) put down an attack on Constantinople by a Russian prince from Kiev named Svjatoslav. He extended his predecessor's conquests as far as Palestine, expanding Byzantine power in the Near East to become its strongest since the early 7th century. John died of typhoid and was followed by the sons of the former Empress Theophano. She had been banished for her implied part in the murder (969) of her husband Nicephorus II (she his second wife).

In 1055 Theodora received the crown (January 14th) of sole Empress of the Byzantine Empire (she had ruled several months as co-equal with her sister Zoe). Theodora was the youngest daughter of the Byzantine Emperor Constantine VIII and Helena, daughter of Alypius. She was the last of the Macedonian line that had ruled the empire for nearly 200 years. She ruled for about 600 days. She was the first eastern ruler to take office after the Great Schism of 1054 which began the formal the subsequent latinisation of Western Christendom under the domination of the Bishop of Rome and it's Frankish supporters.

Basil I introduced a new type of depiction of Christ and usage on coins. Icon veneration had returned under the reign of Michael III, just before Basil took sole office upon Michael's death. The new style placed Christ on the obverse and the emperor on the reverse. Basil copied the image of Christ from the Hagia Sophia in Constantinople, an visage said to have possible ties to that found on the Shroud of Turin. The style was used during the Macedonian dynasty. The gold coin of Theodora, seen to the left and right, well demonstrates this type, showing Jesus Christ on the obverse (Obv) and the Empress on the reverse (Rev).

Many more coins at: http://www.beastcoins.com/Byzantine/Byzantine.htm (list of rulers and many fine examples)
This page New: 03/22/2014

Return to 1916 -- Earlier Roman Coins -- Constantine and other later Rulers