There is archæological evidence of grape growing in Traisental area some 4000 years ago. Grape seeds have been found in urns dating back to 700BC in Zagersdorf, while bronze wine flagons of the Celtic La Tène culture (5th century BC) have been found at Dürrnberg in Salzburg Province (in the western area). Viticulture (the care and feeding of grape vines in order to produce wine) thrived under the Romans, once Probus (a Roman Emperor from 276–282) had overturned the ban on growing grapes north of the Alps (which had been imposed to protect Italian growers). Both Grüner Veltliner and Welschriesling (an ancient variety of white wine grape that is unrelated to the Rhine Riesling and is grown through much of Central Europe) appear to have been cultivated in the Danube watershed since these Roman times.

After the fall of the Roman empire, Viticulture suffered with the invasions of Bavarians, Slavs and Avars; however, from 788, winegrowing under the rule of Charlemagne witnessed considerable renewal. Planting new vineyards saw an introduction of better grape presses at the Abbeys. Once Otto the Great had neutralized the threat from the Magyar incursions (955AD), the Church encouraged Austrian cultivation among the populace at large. During the Middle Ages, each district of Vienna had its own set of vineyards, with 1132 being the earliest written date of production. The first vineyard names recorded are Kremser Sandgrube in 1208, and Steiner Pfaffenberg in 1230. Rudolf IV introduced the first wine tax, Ungeld, in 1359, as Vienna established itself as a center for wine trading on the Danube. The wine business boomed in the 16th century, but the Thirty Years' War and others of the 17th century took a toll, perhaps as much due to the heavy taxation (a lesson for today ?) as from the direct disruption of war. Various drink taxes were unified (that means lowered overall) in 1780, as part of a drive by Maria Theresa and Joseph II to encourage viticulture. An Imperial decree of August 17, 1784, created the distinctive Austrian tradition of "inns" called Heurigen. Derived from the German for "new wine," the decree allowed all winemakers to sell home-grown food with their wine all year round. http://en.wikipedia.org/wiki/Austrian_wine

As a result today, Austria produces remarkable, dry, food-friendly wines (as well as the sweet varieties). Moreover, lest we forget, it's not all Riesling and Grüner Veltliner, not all dry white or sweet; there are other Austrian wine types. Although Riesling seems to lead the way in quality, one must acknowledge that Grüner Veltliner should not automatically take a second place. http://www.thewinedoctor.com/regionalguides/austria.shtml Open a Grüner Veltliner, a Riesling, a Zweigelt or even a Blaufrankish s.v.p. and you can celebrate (or recreate) Frühling (spring) with some of the most refreshing white and red wines from Europe.

Let us examine more closely the uniquely Austrian white grape variety, Grüner Veltliner ("GV" for short). The producer Weingut Martin Nigl ("Nihg'l") in Austria's Kremstal region (just about an hour's drive west of Vienna on the north bank of the Danube) produces a well respected example. This GV has a price-point about double the cost of the drinkable liter bottle from Weingut Ecker. Nigl has been described as a serious GV, a crisp and intense example of the variety, which may furnish a benchmark for this "mineral" dominated Austrian wine. Click HERE to read and / or take part in the discussion on the "Wines of Austria." http://www.wineloverspage.com/wineadvisor2/archives.php 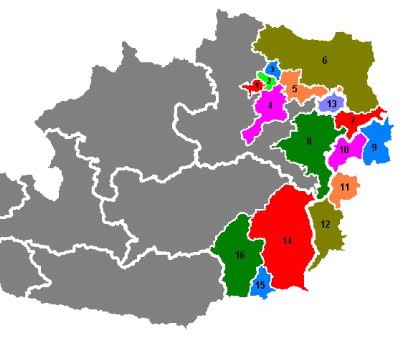 Because the Province of Salzburg occupies a large portion of the Alps and some of the hills north of them, its climate remains generally too harsh to permit good, consistent quality wines to be grown year in and year out. As mentioned above, vineyards once existed in Salzburg, but even the Prince Archbishops got their main sources of drink from somewhere in warmer climes. That much is the bad news. Better News: One may obtain great beer all over Austria, but Salzburg is the home of the most popular brand, Stiegl, which opens its Brauwelt (brewery) to visitors. Most of the beers around Salzburg are lager-style and of a high quality. Of course, there is also Oktoberfest, too (Bavaria is just literally just next door, and Munich just down the road). There is the Müllner Bräu with its famous Märzen (Vienna Red) lager beer and the brewery of Kaltenhausen near Hallein, known for its sweet "Bernstein" bear beer. A beer speciality of Lent (as well as advent -- the weeks before Christmas) is Bockbier, a very strong beer with about 10 percent alcohol that was once designed to nourish fasting monks and keep them happy. If you want to try other types of less well known beers, have a Dunkles Hefeweizen, a dark "white" (predominantly wheat) beer. It is sold in most inns in Austria. These brews cut through the rather substantial cuisine of Salzburg. http://www.visit-salzburg.net/dining/drinks.htm -- see also http://de.wikipedia.org/wiki/Hallein

Getting back to the grape juice, Vienna's (Wein) 700 hectares of vineyards and 320 vintners are unique among major cities. The Vienna Wine trail occupies the areas around Kahlenberg, Nussberg, Bisamberg and Mauer, where the Danube and the proximity of the Vienna Woods furnish optimal climatic conditions. Vintners serve their own wines in restaurants called the Heuriges. The wine is traditionally accompanied by cold dishes from a buffet. http://www.wien.info/en/shopping-wining-dining/wine/wine-trail And, of course, when your not drinking wine or beer in Vienna you drink coffee. In 1683, the Turks arrived at Vienna for a visit and besieged the city. An army came along from Poland and drove the invaders away. Now, legend recites that the Turks fled so quickly that they forgot to take their coffee stash with them. Whether or not this tale is all true, within a few years of this date, the non-alchololic but potent brew had entered Weiner society. The Kaffeehaus in Vienna became a meeting point for writers, artists and other cultured beings. It remains a fixture of Viennese life today; almost all coffee you order in les cafés is of an Espresso-type.