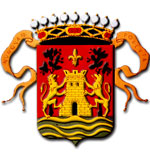 Bayonne (derived from the Basque word ibai meaning "river") stands for an historic city and a greater modern metropolitan area in the far southwest France, at the confluence of the Nive and Adour rivers (about 3 miles (5 km) from the sea) in the Pyrénées-Atlantiques département (olde Basses-Pyrénées). By the 3rd century AD, a permanent Roman castrum, named Lapurdum, occupied the area. It was a military facility, but not a port (the principal port was at nearby Novempopulana). Vikings appeared at Lapurdum (840 AD), seeking to trade, wanting land and desiring a new port. In two years, they had launched an offensive, settling outside the Roman boundaries of the city, along the river banks.

By the 12th century the city had become a key commercial port, as part of Aquitaine. The English controlled the area for 300 years (1151 to 1452) and was the commercial anchor of the southern end of the English Kingdom. French King Charles VII, regained the city at the end of the Hundred Years' War. In response the Adour River changed course shortly afterwards, leaving Bayonne without an access to the sea. The canal to repair the damage to commerce (1578) took over 200 years to complete. Bayonne has endured numerous sieges, economic declines and crashes, but the massacres of St. Bartholomew's Day was a crime in which Bayonne took no part. The small square in front of the Cathedral witnessed the horrors of the guillotine during the French Revolution.

Today, Bayonne together with the towns of Anglet and Biarritz form a metropolitan area of almost 200,000 people. The river Nive divides the city with the cathedral and Hôtel de Ville in Grand Bayonne. The Cathédrale Sainte-Marie is a large, elegantly-styled Gothic building (mostly 12th-13th centuries), with one tower added in the 16th century. Finishing touches and another tower date from the 19th, although much was destroyed in the Revolution. The Gothic structure replaced an earlier Romaneque structure destroyed by fire. The Vieux-Chateau, also in Grand Bayonne, dates from the 12th and 15th centuries and is built upon a portion of the old Roman fortifications. http://www.1911encyclopedia.org/Bayonne,_France

Petit Bayonne is more like Paris' left bank. L'église Saint-Esprit represents part of a bigger complex built by Louis XI to care for pilgrims to Santiago de Compostela, a major pilgrimage destination, not far south of the city in Spain. The five-day Fêtes de Bayonne, which begins on the first Wednesday of August (and attracts people throughout the Basque region) is the most well-known of the city's colourful festivals. Bayonne is on the high-speed TGV line from Paris to Spain. http://en.wikipedia.org/wiki/Bayonne -- More pictures HERE -- Travel Guide

The city's fortifications saw major improvements in the 16th century in order to defend against the Spanish. The citadel was designed from scratch by Vauban, being a large square work with four bastions (eastern half in Petit Bayonne). To the west, Grand Bayonne had five bastions. All saw action against the invading British at the end of the Peninsular War, when it was taken by General Hill after a costly defense by the French defenders. The English Cemetery holds the bodies of those in Wellington's army who died in 1813-4. Queen Victoria visited Bayonne, on her way to Biarritz, to pay them hommage. The citadel is intact, though it is still in the hands of the French Army and therefore not open to the public. http://www.fortified-places.com/bayonne.html

Chocolate and ham are the culinary products of renown from Bayonne. Cocoa is imported to the town which distributes candy throughout Europe. The confectioners in Bayonne belong to the Chocolate Guild and Academy of France to maintain the standards of the craft. Jambon de Bayonne is a proscuitto-like ham that is readily available from local butchers and in the area restaurants. http://www.bayonnenj.org/historical/france.htm

Biarritz today is a little seaside resort in the Pays-Basque region, which lies southwest of Bayonne, halfway to the Spanish border. The town has drawn visitors, humble and haute, for centuries. Vikings who invaded Gascony in 840 settled in Biarritz. The Scandinavians settled in the area above the Gardague Beach. In later times one of its famous seafront hotels, still welcoming guests in a baronial style, was once the suitably extravagant seasonal home to Napoleon the Third and Princess Eugenie, as well as Victoria, Queen of all England, Scotland Wales and Ireland. As with every artisanal producer in France, Henriet in Biarritz (Avenue Aristide Bassilour) is known for a particular specialty, in this case, it is their Rochers. They are named for the rochers or spectacular large rocks off the coast that have been the bane of shipping for centuries but which surely make for some spectacular surf. Rochers of the edible-ilk are nubby-textured, dark chocolate ball-like creations that are a sublime blend of top quality dark chocolate, tiny bits of oranges confits and chunks of grilled almonds. http://www.travellady.com/Issues/May08/5004Rocks.htm Biarritz is easily accessible from Paris by France's high-speed train, the TGV, which departs from Gare de Montparnasse.

Dax is northeast of Bayonne, no more than 20 miles, on the Adour. This town in the Landes département (situated on the edge of the Landes Forest), Aquitaine région, has an ancient history. Its thermal springs (147° F (64° C)) and mud baths have "cured" rheumatism since Roman times, when an emperor's daughter took the waters there. The city's website (French only) has good information about the area's heritage. The http://www.touradour.com/ website has a detailed English language description of the town's tourist sites. The Romans first cultivated the city, which they called Aquæ Tarbellicæ (a name derived from the name of the celtic tribe that settled in the region: Tarbelles) and then Aquae Augustæ, named after the daughter of Emperor Augustus of Rome, Julia Augustæ, who's visit made the city and its beneficial springs famous throughout ancient Rome. Its later Roman name was Civitas Aquensium. In the Middle Ages, the town was administered by viscounts until 1177. With the acquisition of Aquitaine by Henry II, Plantagenêt, later King of England, Dax remained under the English rule until 1451, when it was conquered by the French troops before the end of the Hundred Years' War. It successfully withstood a Spanish siege in 1521-1522. The most modern of the ramparts were largely removed during the 19th Century.

Some features of interest are the archæological remains of a Roman-era crypt, including the foundations of a Roman temple from the 2nd Century AD, the remains of the Roman town walls (4th Century AD), the cathedral (17th-18th Century), which has a beautiful Gothic doorway (13th Century) from an earlier structure on its spot, and of course, the thermal springs (Dax and Aix mean the same thing). The Diocese of Dax or Acqs was a Roman Catholic ecclesiastical territory in south-west France, established in the 5th century and suppressed after the French Revolution. About 1588 St. Vincent de Paul (a local) made his first studies with the Cordeliers of Dax, but good secondary education at Dax dates only from the establishment of the Barnabites in 1640. St. Vincent it would appear was named after Saint Vincent de Xaintes a Bishop of Dax, who rests today in an ancient crypt below a modern church.