Bremen (its somewhat distant harbor, together which comprise Freie Hansestadt Bremen) was no haven against Viking raids. Saint Ansgar was born on September 8, 801 in Corbie (This small town is situated 15 km (9.3 mi) up river from Amiens, in the Département of Somme and is the main town of the Canton of Corbie). In 823 he became a teacher in the newly founded monastery in Corvey in Westphalia (modern Germany). In 829 he founded the first Christian church in Sweden. He returned to Germany in 831 and became the first bishop of Hamburg. He continued his work of christianization in Denmark and Sweden, but after attacks by the Vikings not only was Christianity halted in those lands, but Hamburg itself was destroyed (845). He retreated to become Bremen's first bishop. From there he continued his efforts to bring Christianity to the Scandinavian countries. Through his efforts he is known as the Apostle of the North. He was canonized by Pope Nicholas I. He is the patron saint of Denmark. February 3rd, which marks his death in 865AD (in Bremen), is the feast day of St. Ansgar. 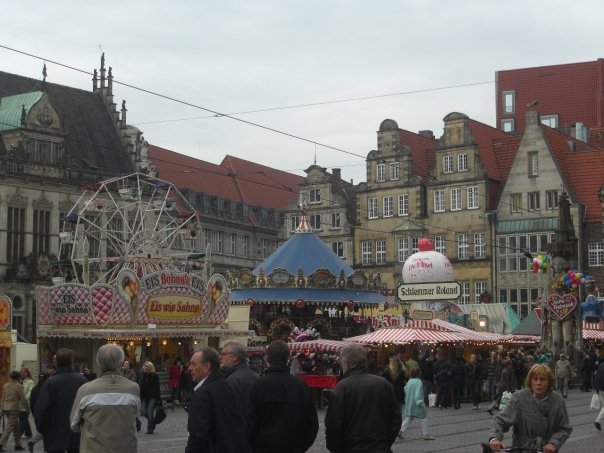 Bremen became a Hanseatic League affiliate (1260) in northwestern Germany. A commercial and industrial city with a major port on the river Weser, Bremen is part of the Bremen-Oldenburg metropolitan district of nearly 2 and one-half million souls. In 787 Willehad of Bremen was the first Bishop of Bremen. In 848 the diocese of Hamburg merged with the diocese of Bremen. Frederick I Barbarossa granted the city considerable privileges, making it an independent political entity under his rule. When the Protestant Reformation swept through Northern Germany, St Peter's Cathedral belonged to a cathedral immunity district (German: Domfreiheit), an extraterritorial enclave of Catholics. In 1532, riots closed the Cathedral, and the area developed overtime a Calvin-Lutheran protestant outlook and practice. Things fell apart during the intrigues of the Thirty Years War, but were gradually put together, but not without some measure of destruction and misery. The harbor of Vegesack became part of the city of Bremen in 1803. In 1811, Napoléon invaded Bremen and integrated it as the capital of the Département de Bouches-du-Weser (Department of the Mouths of the Weser) into the French State. In 1813, the French — as they retreated — withdrew from Bremen. Johann Smidt, Bremen's representative at the Congress of Vienna, prevented the mediatisation of Bremen, Hamburg and the Lübeck by which they were not incorporated into neighboring monarchies, but became sovereign republics. Bremerhaven became the port town as the Weser River had silted and became impassible for Ocean vessels. By then the area had become a manufacturing and trade center. And, of course, Brauerei Beck & Co KG, a brewery, was founded in 1837 and remains in operation today. Following the bombing of Bremen in World War II, the British 3rd Infantry Division under General Whistler captured Bremen in late April 1945. Henrich Focke, Georg Wulf and Werner Naumann founded Focke-Wulf Flugzeugbau AG in Bremen in 1923; the aircraft construction company as of 21st Century forms part of Airbus coalition. Every year since 1036, during the last two weeks of October, Bremen has hosted the Freimarkt (Free market), one of the world's oldest and in Germany one of today's biggest continuously celebrated fairs. And, there is a popular Christmas fair, too.

Many of the attractions in Bremen lie within the Altstadt, an oval area surrounded by the Weser River, on the southwest, and the Wallgraben, the former moats of the medieval city walls, on the northeast. The Cathedral of Saint Petri (13th century) sits to the east of the Marktplatz (Market square), with sculptures of Moses and David, Peter and Paul and Charlemagne. The Liebfrauenkirche (Our Lady's Church) is the oldest church structure of the town (11th century). Its crypt features several impressive murals from the 14th century. The Marktplatz is dominated what some describe as the opulent façade of the Town Hall (Rathaus) of Bremen. The building arose between 1405 and 1410AD in a Gothic style, but the current façade was built two centuries later (1609–12) in a Renaissance style. The Town Hall is the seat of the President of the Senate of Bremen. Today, it hosts a restaurant in original decor with gigantic wine barrels, the Ratskeller in Bremen, and the wine lists boasts more than 600 — exclusively German — wines. It is also home of the twelve oldest wines in the world, stored in their original barrels in the Apostel chamber. In July 2004, along with the Bremen Roland, the building was added to the list of UNESCO World Heritage Sites. On the west side of the Town Hall: one is the statue Bremen Roland (1404) of the city's protector, Roland, with his view apposing the Cathedral and bearing Durendart, the "sword of justice" and a shield decorated with an imperial eagle.

Hamburg: Situated on the river Elbe, the port of Hamburg is the third-largest port in Europe (after the Port of Rotterdam and the Port of Antwerp). Hamburg's official name is the Free and Hanseatic City of Hamburg (Freie und Hansestadt Hamburg). The radio, internet and television broadcaster Norddeutscher Rundfunk calls Hamburg home, along with another 120 thousand business concerns. The first historic name for the city was, according to Claudius Ptolemy's reports, Treva. The city, however, takes its modern name, Hamburg, from the first permanent building on the site, a castle whose construction was ordered by the Emperor Charlemagne in AD 808. The castle was built on rocky terrain in a marsh between the River Alster and the River Elbe as a defense against the Slavic incursions from the east. The castle was named Hammaburg, burg meaning castle or fort. The origin of Hamma remains uncertain, as does the exact location of the ancient Kasteel. In 834, Hamburg became the seat of a Roman Catholic bishopric, whose first bishop, Ansgar, became known as the Apostle of the North. Two years later, Hamburg was united with Bremen as the bishopric of Hamburg-Bremen. In 1529, the city embraced Lutheranism, and Hamburg subsequently became a refuge for Protestant refugees from the Netherlands and France from wars that lasted for nearly a century. Hamburg was destroyed and occupied several times. In 845, a fleet of 600 Viking ships sailed up the River Elbe and destroyed Hamburg which, at that time, was a town of nearly 500 full-time residents. In 1030, the city was razed by King Mieszko II Lambert of Poland, using the "Sherman" method of occupation. Valdemar II of Denmark raided and occupied Hamburg in 1201 and once more 13 years later (1214). The Black Death killed at least 60% of Hamburg's population in 1350. Hamburg had several great fires, the most notable ones in 1284 and during early May 1842. Allied bombing leveled much of the city. The bomb-induced Firestorm of 1943, in which 40,000 civilians died, being the most famous raid-related event. Because the border of post-war East and West Germany sat only about 30 miles away, trade diminished as it no longer fed the population in these areas.

Structures like Saint Nicholas' Church, the world's tallest building for part of the 19th century, remains an outstanding visual icon. The skyline of Hamburg features high spires of its principal churches (Hauptkirchen) Saint Michael's Church (nicknamed “Michel”), Saint Peter's Church, Saint James' (St. Jacobi) and St. Catherine's Church covered with copper plates, and of course the Heinrich-Hertz-Turm, a once publicly accessible radio and television tower. The many streams, rivers and canals in Hamburg feature over 2300 bridges, more than Amsterdam or Venice. Hamburg possesses more bridges inside its city limits than any other city in the world. The Köhlbrandbrücke, Freihafen Elbbrücken, as well as the Lombardsbrücke and Kennedybrücke dividing Binnenalster from Aussenalster are important roadways.

Hanover: James I King of Scotland and later of England (son of Mary Queen of Scots (not of England)), his daughter Elizabeth (Queen of Bohemia), the Duke of Brunswick (Hanover) and their son George I, King of England (and the Elector of Hanover in the Holy Roman Empire) could be said to be the group of royalty who most have defined the modern British Union (Great Britain), when the issue of the House of Orange failed. Hanover was founded in medieval times on the south bank of the river Leine. Its original name Honovere may mean "high (river) bank", though this is debated oft (cf das Hohe Ufer - Das Hohe Ufer in Hannover ist eine Uferstraße am östlichen Ufer der Leine. Die Straße begrenzt die Altstadt nach Westen, am gegenüberliegenden Leineufer befindet sich der Straßenzug Leibnizufer). Hanover, a small village of ferrymen and fishermen, grew to a comparatively large town in the 13th century due to its position at natural crossroads. Hanover became a gateway from the east to the Rhine, Ruhr and Saar river valleys. By the modern age, Hanover had become an important road junction, railhead and production center, a target for strategic bombing during World War II. More than 90% of the city-centre was destroyed in 88 bombing raids. After the war, the congregation did not reconstruct Aegidienkirche, its ruins remaining as a war memorial.

Hanover is one of the leading exhibition places in the world. Each year Hanover hosts more than 60 international and national events. The most popular ones are the CeBIT, the Hanover Fair, the Domotex, the Ligna, the IAA Nutzfahrzeuge and the Agritechnica. Hanover also hosts a huge number of congresses. But Hanover is not only one of the most important Exhibition Cities in the world, it is also one of the German capitals for marksmen. The Schützenfest Hannover is the largest Marksmen's Fun Fair in the world and takes place once a year. It consists of more than 260 rides and inns, five large beer tents and a big entertainment program. The Oktoberfest Hannover is the world's second largest Oktoberfest with around 160 rides and inns, two, count 'em 2, large beer tents and about 1 million visitors each year.

At the centre of the Old Town stand the enormous Marktkirche (Market Church, preaching venue of the bishop of the Lutheran Landeskirche Hannovers) and the Old Town Hall. Nearby are the Leibniz House, the Nolte House, and the Beguine Tower. The Kreuz-Church-Quarter has kept many small lanes. Nearby is the old royal sports hall - which is now a theatre, called Ballhof. On the edge of the Old Town are the Market Hall, the Leine Palace, and the ruin of the Aegidien Church which is now a monument to the victims of war and violence. Through the Marstall Gate you arrive at the bank of the river Leine, where the world-famous Nanas of Niki de Saint-Phalle are located. They are part of the Mile of Sculptures which leads from Trammplatz, following the river bank and crossing Königsworther Square up to the entrance of the Georgengarten. Near the Old Town is the Calenberger Neustadt district where the Catholic Church of Saint Clemens, the Protestant Reformed Church and the Lutheran Neustädter Kirche are located.