The first group consists of individual Pics, from 100.jpg to 118.jpg

If you Click on pictures you may also find additional links

A new airmail stamp of 15-cent denomination was issued for use in the contract air­mail service and first placed on sale at Washington, D.C., September 13, 1926.

July 25, 1909: A French aviator, Louis Blériot, made the first crossing of the English Channel from Calais to Dover in a powered-aircraft, winning a £1,000 prize offered by the London Daily Mail. Piloting his Type XI monoplane at an average of 39 miles per hour, Blériot made the trip of 23.2 miles in just over 35 minutes. National Public Broadcasting in the USA (PBS) has presented a program about the event (it is several years old now, but still well worth a view): http://www.pbs.org/kcet/chasingthesun/innovators/lbleriot.html

The 5¢ Beacon Air Mail Postage-stamp -- July 26, 1928: A new 5¢ airmail rate went into effect August 1, 1928. The purpose of a rate decrease (from 10¢) was to increase the volume of air-shipped mail, thereby increasing the revenue of the private air mail carriers, keeping them in business. Call it the Laffer curve of postage rates. The 5¢ Beacon Air Mail stamp was issued to meet this new rate.

Why was the 26th chosen for issuance instead of the 1st of August when the rates changed ? My guess is that it had something to do with the fact that the Continental Congress established a postal system for the colonies with Benjamin Franklin as the first postmaster general in Philadelphia on July 26, 1775.

The regular snail-mail was still 2¢ in July of 1928 and would not increase to 3¢ until July 6, 1932 during the heart of the hardship and at the height of deflation. Indeed, on July 8, 1932, the stock market fell to its lowest point during the era. The Great Crash, as it was known, had begun in the autumn of 1929, sparking a decade of economic stagnation known as the Great Depression. What a great time for a rate increase of 50%. http://memory.loc.gov/ammem/today/jul08.html Beginning in 2008, we have had another increase during hard times; however, the value of our currency has fallen so much, that the change is barely noticeable (in real purchasing power). An additional Resource: HERE.

In 1997 Great Britain issued special stamps for Saints Augustine of Canterbury and Columba of Iona. Royal Mail's Special Stamps Manager, Rosena Robson, said: The stamps celebrate two great saints who had a tremendous influence on shaping the Christian faith in Britain. This year will see a major pilgrimage following those early Christian missions, and it is appropriate that Royal Mail should be joining those celebrations with this Special Stamp issue. Information about the stamps is HERE. 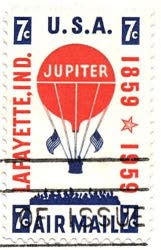 August 23, 1859: The first air mail in the U.S. is carried in a balloon. John Wise and his balloon "the Jupitir" travelled from Lafayette, Indiana, to Crawfordsville, Indiana, carrying 123 letters (and 23 circulars). The intended destination, however was New York City. Unfortunately, the winds were not favorable. The air was still, and the craft had to ascend to 14,000 feet before air currents could propel the balloon. After five hours, Wise had only traveled 30 miles south, not east, and had to touch down in Crawfordsville, Indiana. Nevertheless, the bag of mail eventually made it to New York by train. Never-the-less, in 1959 the United States Postal Service issued a 7 cent stamp commemorating Wise's flight. "Toto, I don't think we're in Kansas anymore." The characteristics of the American journalist consist in an open and coarse appeal to the passions of his readers; he abandons principles to assail the characters of individuals, to track them into private life and disclose all their weaknesses and vices.

The personal opinions of the editors have no weight in the eyes of the public. What they seek in a newspaper is a knowledge of facts, and it is only by altering or distorting those facts that a journalist can contribute to the support of his own views.

The pursuit of wealth generally diverts men of great talents and strong passions from the pursuit of power; and it frequently happens that a man does not undertake to direct the fortunes of the State until he has shown himself incompetent to conduct his own. Quotes from Alexis deTocqueville -- More HERE

Many persons in France think that the violence of the press originates in the instability of the social state, in our political passions and the general feeling of uneasiness that consequently prevails; and it is therefore supposed that as soon as society has resumed a certain degree of composure, the press will abandon its present vehemence. For my own part, I would willingly attribute to these causes the extraordinary ascendancy which the press has acquired over the nation; but I do not think that they exercise much influence on its language. The periodical press appears to me to have passions and instincts of its own, independent of the circumstances in which it is placed; and the present condition of America corroborates this opinion. America is perhaps, at this moment, the country of the whole world that contains the fewest germs of revolution; but the press is not less destructive in its principles there than in France, and it displays the same violence without the same reasons for indignation http://xroads.virginia.edu/~HYPER/DETOC/1_ch11.htm

August 24, 79AD: A volcano near today's Italian city of Naples, Mount Vesuvius, erupts and in the process wipes out much of the population of the cities of Pompeii and Herculaneum. The destruction did not occur in one hour or one day. The location of the cities are forgotten until the 19th Century. Today, excavation has revealed the life and times of all stratæ of Roman Society from the first century AD. http://www.vesuvioinrete.it/e_storia.htm

September 10th -- Saint Aubert feast day -- Evêque d'Avranches: Saint Aubert, the twelfth known bishop of Avranches, served after the death of Ragentrammus. He was born into a family of considerable means, probably either at Genêts, or at Huisnes (then called Itius). At the end of the prehistoric time period, that site which will become Avranches was inhabited by the Gallic people called the Ambibares (or Abricantes -- people from the Abers).

Pious and friendly, yet a prelate of loneliness, Aubert often withdrew himself to the Isle of Mount-Fall (also often referred to as Mont Tombe), then surrounded by the forest of Scissy It is at Mount-Fall where the Archangel Michel appeared to Aubert, instructing him to build a new church (708AD). and since then the hill has become known as Mount-Saint-Michel. Saint Aubert died in 725, his body buried within the Mount. In 966 a community of Benedictine monks was established upon this solid rock. His body remained over 1000 years on the rock until the French Révolution dispersed his remains; only his head survived with the mark upon it of the Archangel's finger. It is kept in a church at Avranches called Saint-Gervais.

The foundation of the imposing castle at Avranches is from the time of Charlemagne, after his conquest of Brittany. Indeed, Charlemagne is reported to have stayed in Avranches, but it is Norman domination that will transform the region. http://www.crwflags.com/fotw/flags/fr-50-av.html Henri II Plantagenêt (King of England) often stayed at Avranches. It is in front of the gate of its normanesc cathedral (1172) that he made honourable fine for his part in the murder of his friend, the Archbishop of Canterbury, Saint Thomas Becket (December 30, 1172). King and Saint Louis IX, having purchased the title and lands of the Vicomté of Avranches, now owned the city's Norman castle, which too became one of his favorite places. Mont-Saint-Michel stood unconquered during the Hundred Years War.

September 14, 1758: At the Forks of the Ohio River (at Fort Duquesne later to be called Fort Pitt, in a disputed portion of Penn's Woods), French forces, under command of François-Marie Le Marchand de Lignery, defeat Highlander, Major James Grant's troops on as yet unnamed heights above Fort Duquesne. Almost 300 British Regulars (77th Highland Regiment), Virginians and Pennsylvanians died this day as French-allied native tribes spilled out of Fort Duquesne and swept over the British forces. Many an englishman was taken captive and tortured to death.

For his poor effort Grant gets the hill named for him, and later Grant Street in the City of Pittsburgh, which goes up the Hill. When General Forbes and Colonel Bouquet arrived with the remaining forces on the 25th of November of that year, Fort Duquesne was a smoking ruin as the French had fled. Today, Heinz Field sits on the spot where Native villages once stood and where some of Grant's doomed army met their brutal end above the banks of the Allegheny River. Grant himself, although captured, escaped certain death and had what can best be described as a checkered career thereafter.

September 15, 1927: France issues two stamps to celebrate the reunion of the American members of the French Foreign Legion (Legion Americaine), who fought for France during World War I. For more information see: Edwin W. Morse, America in the War-The Vanguard of American Volunteers in the Fighting Lines and in Humanitarian Service: August, 1914 --April, 1917. New York, Charles Scribner's Sons (1919). More links -are- HERE. All the stamps seen here were issued within a few years of each other and are found at a large Website showing many, many issues: http://pluq59.free.fr/sections.php?op=listarticles&secid=4. Right Click to view a much larger image -- s.v.p.

September 18, 1961: Dag Hammarskjold, Secretary-General of the UN, was killed in a suspicious plane crash in Northern Rhodesia (now Zambia). He was flying to negotiate a cease-fire in the Congo. Hammarskjold was the son of a Swedish prime minister. In 1953, he was elected to the top UN post and in 1957 was reelected. During his second term, he initiated and directed the United Nation's vigorous role trying to bring peace in the Belgian Congo.

Take away the blood-stained bandage from off an Irish brow
We fought and bled for Ireland and will not shirk it now
We have held in her struggle, in answer to her call
And because we sought to free her we are placed against a wall

Two days after the airmail stamps first appeared (1918), The U.S. Post Office and the U.S. Army began regularly scheduled airmail service between Washington and New York through Philadelphia. Lieutenant George L. Boyle, an inexperienced young pilot (U.S. Army Air Corps), tried to make the first flight from Washington, but he got lost, flying south rather than north. The second leg of the Washington-Philadelphia-New York flight, however, arrived in New York on schedule -- without the Washington mail. The distance of the route was 218 miles. One round trip per day was made six times a week. The Army flew the route until August 10, 1918, when the U.S. Post Office Department took over the entire operation with its own contract planes and pilots.

General Edward Braddock was mortally wounded when French and Indian troops ambushed his force of British regulars and colonial militia, which was on its way to attack France's Fort Duquesne (Pittsburgh). Gen. Braddock's troops were decimated at Fort Duquesne, where he refused to accept Washington's advice on frontier style fighting. British Gen'l. Braddock gave his bloody sash to George Washington at Fort Necessity just before he died on July 13th. http://www.virtualology.com/virtualmuseumofnaturalhistory/... 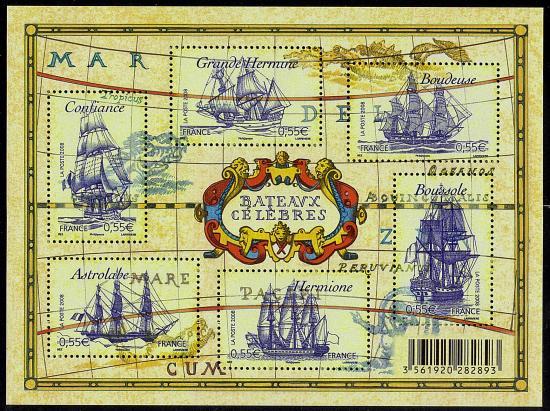 Five cents was the rate that paid the foreign destination fee for first class mail. Covers with an Exposition cancellation bring substantial premiums. This stamp portrays what was then the largest single span steel bridge in the world, traversing the river just below below Niagara Falls, providing a spectacular view. If you look closely you can see two trolley cars crossing the bridge linking the U.S. and Canada. Niagara Falls was of course an integral part of the World's Fair in Buffalo, and the hydroelectric power, which it delivered turned on the spectacular City of Lights, the most dynamic display of electric light to date, one of the highlights of that World Fair. The bridge today is closed to all but pedestrian traffic, I think.