With a population of about 3,000 inhabitants, Anduze is situated in the rocky foothills of the Cévennes mountains, and serves as the Porte des Cévennes – the entrance to the Cévennes mountain range. It has been known since the 17th century for its unique pottery, in the shape of a large urn-like vase on a short pedestal base, decorated with insignias and draped garlands. Even the Sun King (Louis XIV) had orange trees planted in the Italian-style Vases d’Anduze on the grounds of the royal residence at le Château de Versailles.

The word Cévennes comes from the Gaulish Cebenna, which was Latinized by Julius Cæsar to Cevenna. There is also mention of a goddess Cebenna based on Mount Caroux above Olargues in Herault. The Cévennes are named Cemmenon (Κέμμενων) in Strabo's Geographica. The Cévennes are a range of mountains in south-central France, covering parts of the départements of Gard, Lozère, Ardèche, and Haute-Loire. The Cévennes are a part of the Massif Central. They run from southwest (Montagne Noire) to northeast (Monts du Vivarais), with the highest point being the Mont Lozère (1702m). Another notable peak is the Mont Aigoual (1567m). The Loire and Allier flowing towards the Atlantic ocean; the Ardèche and tributary Chassezac, Cèze, the different Gardons go to the Rhône; the Vidourle, Hérault and Dourbie rivers to the sea from their source in the Cévennes. The region contains the Parc National des Cévennes created in 1970 and the Parc Naturel Régional des Monts d'Ardèche.

Two canyons are near the region: the Gorges de la Jonte (the Jonte River gorge) and the Gorges du Tarn (the Tarn River gorge). It borders the lower part of the valley of the River Rhône. The climate is Mediterranean, but varies with the elevation. The Cévennes National Park (nearby to Nîmes) is the second largest park in France and is a walkers' paradise, with granite mountains, vast limestone plateaux, beech forests, caves and river gorges. Hiking is extremely popular here, with over 1,800 km of marked trails that follow old shepherds paths. You can even take the "Sentier Stevenson" and follow in the footsteps of Robert Louis Stevenson who travelled here with his donkey, Modestine. http://www.france-travel-secrets.com/mountains-in-france-cevennes.html

The region is known for its large community of Protestants, or Huguenots. During the reign of Louis XIV, much of the Huguenot population fled France, particularly following the revocation of the Edict of Nantes in 1685, but the community in the Cévennes largely remained in place, protected from attack by the hilly terrain. In 1702, this population, dubbed the Camisards, rose up against the monarchy. The Cévennes were the theater of war for the struggle of the Camisards. The two sides agreed to peace in 1715; but in fact, the Royal suppression against non-Catholics lasted until the French Revolution. http://fr.wikipedia.org/wiki/Cévennes

La Bête du Gevaudan was a real wolf-like monster (celtic pattern) that prowled the Auvergne and South Dordogne areas of France during the years 1764 to 1767, killing about 100 people, often in bizarre circumstances. Every effort to stop her failed and she became nationally infamous. The King - Louis XV - took a personal interest, partly because she caused unrest in an area of tension and potential revolution. Many explanations - mutant, prehistoric beast etc. - were put forward at the time and during the two centuries since but none has ever been generally accepted. The important firm fact is that sufficient evidence remains to prove the Bête really did exist and was not just a myth.

Misc: The grey wolf is back in France after 70 years. Wolf tracks were identified this month in the snow of the Cévennes mountains, in the lower part of the Massif Central, north-west of Avignon. A park ranger also reported seeing a wolf near the Cévenol village of Bondons. "Guess who's Coming to Dinner ?" Set in the Cévennes mountains on the border of a small village of the Languedoc region, Chateau de Montjoie is a beautiful 16th Century castle built by Captain De Leyris. http://chateau-de-montjoie.com/Location.htm see also http://www.rtgenealogy.net/Finiels.htm Domaine De Lavabre is an ancient estate located at the foot of the Cévennes mountains in the appellation of the Pic Saint-Loup, north of Montpellier in the Languedoc region.

Alès lies 40 km N.N.W. of Nîmes, on the left bank of the Gardon River, which half surrounds it. It is located at the foot of the Cévennes, near the Cévennes National Park. In the 16th century Alès was an important Huguenot centre. In 1629 the town was taken by Louis XIII, and by the Peace of Alais, the Huguenots gave up their right to places of surety (garrison towns) and other privileges. A bishopric was established there in 1694, but suppressed less than 100 years later (1790). The streets are wide and its promenades and fine plane-trees make the town attractive; but the public buildings, the chief of which are the Saint-Jean-Baptiste cathedral, a heavy building of 18th century style, and the citadel, which served as barracks and prison into the modern era. http://www.ville-ales.fr/tourisme/tourisme.php

Excavations on the hill of Hermitage over looking the city helped uncover remains of Gallic habitats of the first century BC, including a mosaic from the time of Julius Cæsar (first half of the first century BC). The town served as an an opiddum, securing the border of Gaul yet independent of the Roman province of Trans-alpine Gaul, no doubt profiting on trade. 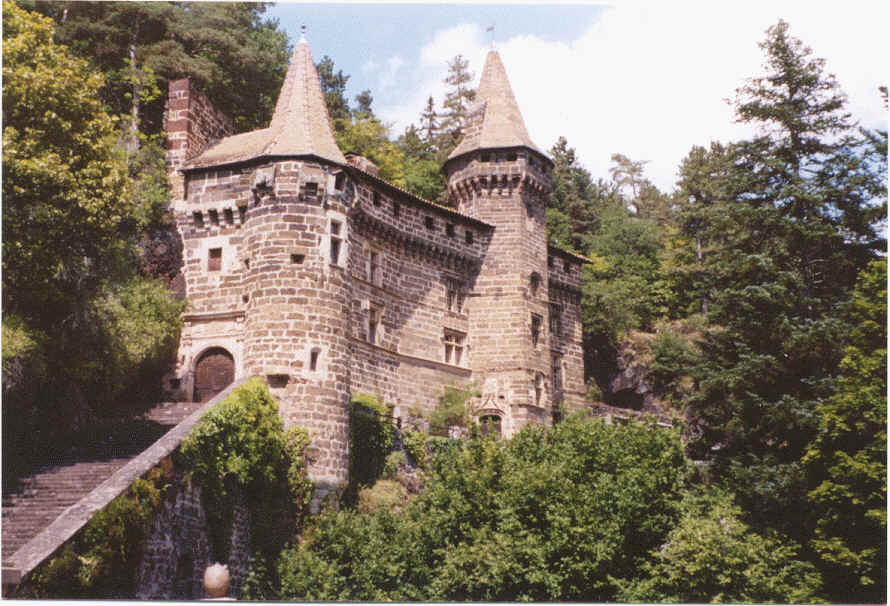 Two kilometers SW of Saint-Paulien (Haute Loire near Le Puy en Valey) is the Château de la Roche-Lambert curiously placed in a niche cut out of a basaltic precipice, where a castle has existed since 1164, when a deed was signed by the knight Pierre de Rupe Lamberta. The Château (which has been restored) was much dilapidated at one time, but contains some worthy painted chambers. Ms. Georges Sand makes it the residence of her hero Jean de la Roche in the book of the same name.

This Château de la Roche is a nest, a nest of troglodites, inasmuch as the whole flank of the rock we occupy is riddled with holes and irregular chambers which tradition points to as the residence of ancient savages ... and which antiquaries do not hesitate to attribute to a prehistoric people ...."

Paulianus (celebrated February 14th), was the last bishop of the ancient city (in the fourth century) before the transfer of the bishopric to Puy-en-Velay ("Anicium" or "Podium Aniciense", which in turn took name "Civitas Vellavorum" - Le Puy-en-Velay) -- named after the Vellaves tribe of the Arverni. The tribes' name roughly translates into the French term Montagnards or mountain-peoples. This diocese became afterwards one of the most notable in France and western Europe. Interestingly, the first recorded pilgrimage across the Pyrenées to the shrine of Saint James is that of a bishop of Le Puy-en-Velay. Le Puy itself is a place to which Marian pilgrims travel. Adhemar (also known as Adémar, Aimar, or Aelarz) de Monteil (died August 1, 1098), one of the principal figures of the First Crusade, was bishop of Le Puy-en-Velay from before 1087. After his death, some of the soldiers claimed to have been visited by his spirit during the siege of Jerusalem. They reported that Adhemar instructed them to hold another procession around the walls. This was done, and Jerusalem was taken by the Crusaders in 1099. The statue of Our Lady of Le Puy and the other treasures and relics escaped the pillage of the Middle Ages, but were lost during the French Revolution. http://www.newadvent.org/cathen/09185b.htm

Along the route of the 2011 Tour de France