The Clain River joins the Vienne River near Châtellerault, in Cenon-sur-Vienne (Vienne département, Poitou-Charentes région, west-central France) about 40 miles south-southwest of Tours. The town of Châtellerault was an important stronghold on the northern marsh of Poitou, established by the Count of Poitiers to secure his borders in the early 10th century. The count's local representative, the Vicomte de Châtellerault, established as a hereditary appointment by the time of Airaud, was probably kin to the counts of Auvergne and dukes of Aquitaine; his heirs were vicomtes (viscounts) until the mid-11th century. The daughter of Aymeric I, Ænor of Châtellerault (ca 1103 - ca 1130), was mother of Eleanor of Aquitaine. On May 11, 1152, Henri Plantagenêt married Eleanor of Aquitaine -- Henri became Henry II, King of England. The title, Vicomte de Châtellerault, passed in turn to each of three great French noble families: La Rochefoucauld, Lusignan and, from the 13th century until the French Revolution, to the family of Harcourt. The town was known for its manufacture of swords during the 19th Century, and later its arms.

Château de Valençay is a residence of the d'Estampes and Talleyrand-Périgord families in the commune of Valençay, in the far north of the Indre département. Although geographically it is part of the province of Berry, its architecture invites comparison with the Renaissance châteaux of the Loire Valley, notably the Château de Chambord. Cheese from Valençay is shaped like a pyramid with the top cut off. Originally, the shape was pyramidal; but, upon returning from a disastrous campaign in Egypt, Napoléon paused in Valençay. He saw cheese. Angry, Napoléon took his sword to remove its top. Covered with salted charcoal ash while maturing, a natural blue mold covers the produit. Sancerre or Chablis goes well with Valençay fromage. Cheese-France.com Du cœur du Berry, le vignoble de Reuilly s'étend des rives de l'Arnon (aux bords du Cher sur près de 186 hectares). L'aire d'appellation s'étend sur 7 communes: Reuilly, Diou, Lazenay, Chery, Lury, Cerbois et Preuilly. http://www.vins-centre-loire.com/reuilly/ The vines of Reuilly (near Valençay) were first harvested in the 7th century. King Dagobert presented the grapevines as a gift to the monks of the Saint Denis Abbey nearby. Located in the Cher Valley, the wines were brought to the cities of Bourges, England and Netherlands. Reuilly offers a very fresh and fruity expression of the Sauvignon Blanc grape but without being too mineral, along with light drinkable versions of Pinot Noir (and rosés made from Pinot Gris). a-la-recherche-du-vin

To the east of Châtellerault, some 40 miles, is Châteauroux on the Indre River, the capital of the Indre département in central France and the second-largest town in the région of Berry, after Bourges. L'église Saint André stands prominent in the town; but, Châteauroux derives its name from Château Raoul (Castellum Radulphi), a fortress which has towered over the town 1000 years. Be sure to visit: Chateaurouxdailyphoto @ Blogspot dot com, where you will find great pictures (especially page 2: messages plus anciens) and some English explanations. Saint Martial's Church (l'Église Saint Martial) is located on the Grand Rue, in Châteauroux. The website of the city deals with a 30 m long gothic nave, a 22 m high bell-tower from the 15th century (referenced as an historical monument) and sculpted modillions. Inside the church are preserved the relics of the Venerable Bonencontre (Bonocuntrus a compaingnon of Saint-François d’Assise) who established the couvent de Saint François de Chasteau-Raoulx (Cordeliers de Châteauroux).

La Ville de Châteauroux a été précédée dans l’histoire par celle de Déols (palais de Déols (937AD) et l’abbaye fondée en 917). La présence gallo-romaine y est attestée par des pierres sculptées, des monnaies de la céramique, des urnes. The Hundred Years War brought insecurity to the area. In 1356, the Black Prince, son of the King of England, could not take the castle of Raoul at Châteauroux, however the city was burned. Looting took place a little later in 1374. The Barony of Châteauroux became a county in 1498. In 1503 came the death of Andre III Chauvigny led to several hundred years of uncertainty over title. French King Louis XV eventually acquired the duchy in 1737 and gave it in 1743 to the Marquise de Tournelle. http://www.ville-chateauroux.fr/ Châteauroux became the administrative capital of the department during the French Revolution.

The town was a stopping point on the 2008 Tour de France (Cholet to Châteauroux -- stage 5). Nearby Issoudun was the ending point for the 2009 Tour de France on stage-day 10 (also referred to as Issoundun, which is its ancient name). In 1195, Richard I of England defended Issoudun from the advances of Philip II of France. http://www.issoudun.fr/page.php?id=86 Just a single monument on Department Route 960 (to the northwest) remains to mark Issoudun's part in the Great War (World War I), when it was an air-training center for the United States Air Service. Today the International broadcasting center of TDF (Télédiffusion de France) is at Issoudun/Ste-Aoustrille. Issoudun is currently utilized by TDF for shortwave transmissions. The site uses 12 rotary ALLISS antennas fed by 12 transmitters of 500 kW each to transmit shortwave broadcasts by Radio France International (RFI), along with other broadcast services.

The town of Bélabre is located in the Brenne Natural Park in the Indre district of the Poitou-Charentes, southwest of Châteauroux. From Bélabre head towards Lignac Village (south-southeast) to see the Château Guillaume with its roman-style dungeon. It dates from the 11th century and was enlarged in the 13th century. The fortress was begun by Guillaume X, Duke of Aquitaine, father of Æleanor (Aliénor d'Aquitaine), who may herself have been born there (about 1122). Some 36 parcs naturel régionaux exist in France, federated around a charter of common objectives to preserve and protect natural and cultural heritage. La Brenne harbors an internationally important wetland, related habitats and species of threatened wild plants and animals (e.g. Pond Tortoise (or Terrapin)). With over 1300 lakes La Brenne is one of the most important fish farming areas in France. Holiday in France Website

The Roman city of Argentomagus was located in the Mersans plateau (upstream from today's Châteauroux), at the strategic point where a Roman bridge once traversed the River Creuse. The Latin name of the city meant "Silver Market." The modern city of Argenton-sur-Creuse takes its name from the ancient site. Substantial areas of the ruins have been been excavated, including an amphitheatre, a Roman villa, a cemetery and a thermal spring. Unique finds have also been recovered, such as a circular pedestal et le jardin romain d' Argentomagus à Saint-Marcel. A local museum related to the site exists in Mersans -- Musée et site archéologiques d'Argentomagus. L’église Saint-Martin de Nohant-Vic (ou Vicq -- approximately 36 km south-east of Châteauroux) date du XIe siècle. Elle fut donnée à l’abbaye de Déols (près de Châteauroux) entre 1092 et 1099. Blog saintmartindetours Frédéric Chopin (March 1, 1810 – October 17, 1849) composed some of his best known works at George Sand's estate in Nohant. 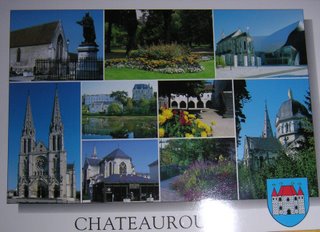 Stained glass at the Raoul Castle

The two distinct branches of the pilgrim route Santiago de Compostela passing through Berry were of similar length - one passing through La Charité-sur-Loire, Bourges, Déols and Châteauroux, and the other through Nevers, Saint-Amand-Montrond and La Châtre. They met in the village of Gargilesse (-Dampierre), no more than 10 miles southeast of Argenton-sur-Creuse nor 10 miles north of Eguzon (-Chantôme). Six miles due west of Eguzon-Chantôme is Saint-Benoît-du-Sault, on the southern border of historic Berry. This is an ancient land, once inhabited by the powerful celtic gauloise tribe of the Bituriges. A tenth century priory and church (and later commercial center) sat atop a granite cliff. Today, it remains a medieval maze of narrow cobbled streets, perfect for picture taking. In 1988, it was declared one of the most beautiful villages of France. Now go just a little south, on to the Limousin region.