August 13, 1961: Soviet forces in East Germany, sealed off the open border, between the Berlin's eastern and western sectors, in order to halt the continued and growing flight of refugees, leaving the oppression and misery of the east. Two days later, work began on the Berlin Wall. The wall would remain until November 9, 1989. The nation dedicated a monument to the 255 people who died crossing the Berlin Wall on August 13, 1998 {found at the corner of Ackerstraße and Bernauer Straße}.

October 2, 1989: Nearly 10,000 people marched through Leipzig, East Germany, demanding legalization of opposition groups and adoption of democratic reforms in the country's largest protest since 1953. This was the beginning of the end. Within the next forty days, the Wall would be falling, and the government which celebrated 40 years of rule on October 7th, collapsed. It was not obvious to many then, but Germany would soon be reunited, and the Soviet Union would spin apart -- at least for a time. 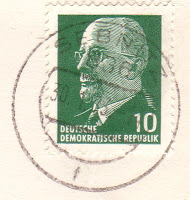 January 21, 1990: The East German party, the SED, changes its name to the PDS. The SED (Socialist Unity Party of Germany) was the name of the communist party of East Germany until 1990. In preparation for {re}unification, the Party, wishing to continue as a viable entity; but, realizing the negative implications of its identity with the East German regime, changed its name to a more media-friendly PDS (Party of Democratic Socialism). The PDS has had seats in parliament after each election since the unification. The name change harkens to the days when the Socialist Party of the United States and the Democrat Party merged and chose to use a name that did not have the nasty implications of a national socialist party (not to mention its murderess reputation).

It was 41 years earlier on January 28, 1949, that the first party congress of the SED within the Soviet Zone of occupation in Germany (later the DDR) closed. It chose a Politburo of which Herren Pieck, Grotewohl und Ulbricht were members. Pieck would become the first head of the East and Ulbricht later became the second.