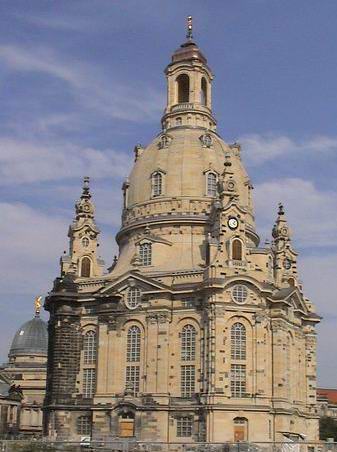 October 30, 2005: The City of Dresden's (Saxony, Germany) baroque cathedral (Frauenkirche-The Church of Our Lady-Notre Dame) has been rebuilt after 60 years. Allied forces fire-bombed the city centre during World War II. This attack destroyed the church and much of the old city. Reconstruction of the structure began in 1994, something impossible under the previous communist regime. This day marks the day of its rededication. Earlier, Coventry Cathedral (England) gave the Frauenkirche a cross made from medieval nails from the roof of the English cathedral, destroyed by Nazi bombing in 1940, during the Battle of Britain. Money for rebuilding came from the German government, the state of Saxony, the city of Dresden, the Protestant church and private donations, including some from the British people. Once a month, an Anglican Eucharist in English is held in the Frauenkirche, with clergy sent from St. George's Anglican Chaplaincy in Berlin.

After 10 minutes of talk about the heroic Italian Campaign, Churchill announced the invasion of France along the Coast of Normandy (June 1944). Nine months later, perhaps 50 thousand souls were dead, as fires still burned, after the end of the fire-bombing of Dresden (February, 13-14th). Neither the Rome Campaign in World War II, nor the Dresden firestorm, can be claimed as high points in American tactical (or even strategic) thinking.

The tragedy in the destruction of Dresden is made famous in the late Kurt Vonnegut's Slaughterhouse Five. Read about the raid at: http://www.libertyforum.org/showflat.php?Cat=&Board=Owk04&Number=293382458. Some would still say the loss was unnecessary to the U.S. War effort, done at the request of the Soviets, to help their efforts to subdue the enemy along the Russian front. Others defend the action as just a routine retaliation for the civilian bombing (and later V-bomb attacks) that the Nazi government had initiated. In any event, until the Russians left the city and Germany was reunited, many final touches on rebuilding the old town to its former style remained. So on October 30, 2005, the Frauenkirche Cathedral was rededicated, 60 years after its destruction, in the City of Dresden. Interestingly, a lawyer and former Russian President, Vladimir Putin (born 1952), was stationed in Dresden as his principle foreign KGB assignment for six years. In 1988, he was awarded the Bronze Order by the hated East German Stasi. Some argue he has not changed from these days.

The Frauenkirche was built as a Lutheran (Protestant) cathedral, even though Saxony's Prince-elector, Frederick August I (1670–1733), was Catholic. The original baroque-style church was built between 1726 and 1743, designed by Dresden's city architect George Bähr (1666–1738), one of the greatest masters of deutschen Barock. In 1736, famed organ maker Gottfried Silbermann (1683–1753) delivered his three-manual, 43-stop instrument. The organ was dedicated on November 25th and Johann Sebastian Bach (1685–1750) gave a recital on the instrument a week later. Frauenkirche's most distinctive feature was a 314-foot (96 meter) high dome, called die Steinerne Glocke or Stone Bell. An unconventional engineering triumph, comparable to Michelangelo's dom for Saint Peter's Basilica in Rome, the 12,000-ton (sandstone) structure soared skyward with no internal supports. Despite initial doubts, the dome proved to be extremely stable. In 1760, more than 100 cannonballs fired by the Prussian army (led by Friedrich II during the Seven Years' War) bounced off the dome. It survived the May uprisings of the mid-19th Century, too, when the church was the center of the resistance.

Seven new bells have been cast for the Frauenkirche. They rang for the first time for the Pentecost celebration in 2003. A bronze statue of Martin Luther, which survived the bombings, has been restored and stands once more before the church. It is the work of sculptor Adolf von Donndorf (1885). http://en.wikipedia.org/wiki/Dresden_Frauenkirche (auf deutsch)

Saxony has a long history as a duchy, an electorate of the Holy Roman Empire (the Electorate of Saxony), and eventually as a kingdom (the Kingdom of Saxony). The first mediæval Duchy of Saxony was a late Early Middle Ages "Carolingian stem duchy" and emerged about AD 700 covering the greater part of Northern Germany. It covered the area of the modern German states of Lower Saxony, North Rhine-Westphalia, Schleswig-Holstein, Saxony-Anhalt. In the 10th century the dukes of Saxony were at the same time kings (or emperors) of the Holy Roman Empire. Times and power changed. The eastern lands, together with the title of Duke of Saxony, were passed to an Ascanian dynasty (who descended from Eilika Billung, Wulfhild's younger sister) and divided by 1260 into the two small states of Saxe-Lauenburg and Saxe-Wittenberg. Saxony-Lauenburg was later renamed Lauenburg and was no longer part of Saxony or its history. Saxe-Wittenberg was confirmed to have inherited the principle ducal title of the Saxons and as such was recognized as an Elector of the Empire in 14th century.

Following the abolition of the Holy Roman Empire in 1806, the Electorate of Saxony became a kingdom by decree of the French Emperor Napoleon, and Elector Frederick Augustus III became King Frederick Augustus I. Frederick Augustus made the mistake of remaining loyal for too long to Napoleon, and he was taken prisoner and his territories declared forfeit by the allies in 1813, with the intention of their being annexed by Prussia. Ultimately, the opposition of Austria, France, and the United Kingdom resulted in Frederick Augustus being restored to his throne at the Congress of Vienna, but Saxony was forced to cede the northern part of the kingdom to Prussia. These lands became the Prussian province of Saxony, which is today incorporated in Saxony-Anhalt. What was left of the Kingdom of Saxony was roughly identical with the present federal state.

On March 4, 1678, Antonio Vivaldi (d.1741), the Italian Baroque composer (The Four Seasons) and violinist, was born in Venice. Some of his contemporaries were composers such as Johann Sebastian Bach, Georg Händel, Johann Pachelbel, Georg Telemann and Henry Purcell. Most of his music was lost until the late 19th and early 20th Centuries. The first major discovery was in a music cabinet in Dresden. Vivaldi had composed a large quantity of music specifically for the Dresden orchestra, and once it had fallen out of fashion (in the 1760's), his works had been placed in storage where they collected dust for a century. Forgotten at the time of his death, Vivaldi was buried in a pauper's grave (just like Mozart). Ironically, the young composer Joseph Haydn was a choir boy at Master Vivaldi's funeral. To find out more about the musical life of Dresden today visit the Dresden Classics page or the Dresden Music Festival website. Many pictures of Dresden HERE.

Augustus II, King of Poland, and Elector of Saxony, established a factory at Meissen, on the Elbe, about 12 miles from Dresden, for the manufacture of hard paste, or true porcelain. Early production was of a red jasperware type, but by 1711 the secrets of white porcelain were known (kaolin type clay). This white earth was known in commerce by the name of Schnorrischte weisse Erde von Aue. The source of Aue kaolin was exhausted about 1850. An early mark, of the Electoral swords crossed, became a traditional pattern for Meissen, though styles changed. see some marks HERE. Der Fürstenzug (auf deutsch) consists of nearly 25,000 tiles of Meissen porcelain about 100 meters in length (950 square meters). It shows the principle characters of the city's past, the kings, electors and margraves, the scientists, artists and craftsmen. The monument survived the bombing.

Wo ist Dresden an der Elbe ???
In Upper Saxony (south of historic Niedersachsen)