Born on March 5, 1512, one Gerald Kremer. His name 'Kremer' means 'merchant' in German, and he was sometimes known as 'Cremer' which is its Dutch equivalent (pronounced Kray-mer in English). While still in his teens, he chose Mercator for a new name, the Latin term for 'merchant' and gave himself the full name of Gerardus Mercator de Rupelmonde {of Flanders (now in Belgium)}. http://www-groups.dcs.st-and.ac.uk/~history/Mathematicians/Mercator_Gerardus.html

Mercator became a well-educated Flemish philosopher and cartographer. Flat maps of the world are often shown in what is called a Mercator projection derived from a round globe. Well, in order to believe in a round globe, one had to dismiss the notion of a flat earth. So, Mercator was arrested in February 1544 and charged with heresy. This was partly due to his Protestant beliefs (in a Catholic Flanders), partly because he travelled to acquire data for his maps, so that suspicions about loyalty had arisen. He spent seven months in prison in the beautiful and modern Rupelmonde château.

Sometime after his release, he wisely moved to Duisburg, on the western edge of the Duchy of Cleves (now in Germany). Mercator was appointed Court Cosmographer to Duke Wilhelm of Cleves, in 1564. During this period he began to perfect the new map projection technique for which he is best remembered (1569). He later put together a collection of maps -and- for the first time an Atlas was available. http://www.navis.gr/men/mercator.htm

Recent archæological studies suggest that today's Duisburg market-place was already in use in the first century. The area was a crossing point on the Rhein River. The Romans already had guarded the river ford for several hundred years (on the trade route called Hellweg) when the Franks arrived to recolonize. The village, where the Ruhr discharged into the Rhine was first mentioned in the 9th century, when cruising Norman vikings spend the winter there (883 -- think of Norway as New York and Duisburg as Miami). A few hundred years later the site becomes a fortified complex and the Abbey of St. John begins operation (1136) at Hamborn (about 3 miles north). The Knights of St. John of Jerusalem found their first settlement on German ground. The Hohenstaufen predecessor of Salvator Church is built (1145). The Rhine changed course (moving away from the city-centre) in the early 13th century, while the city walls that remain visible today are built in the next few hundred years. Gerhard Mercator arrives in 1552. http://www.duisburg.de/micro/english/

In 1666 Duisburg within the Duchy of Cleves became a part of Brandenburg-Prussia. It was severely damaged by Allied bombing in World War II (nearly 300 missions). Today, Duisburg is an independent metropolitan borough within Regierungsbezirk Düsseldorf, with the biggest inland harbor in Europe. Indeed ocean-going river-craft leave from this port. All blast furnaces that remain in the Ruhr Valley are now located in Duisburg. http://en.wikipedia.org/wiki/Duisburg But, perhaps its great glory are its kirchen -- Die Salvator, St. Dionysius, Liebfrauen with its massive Kirchturm, St. Hubertus, Christus and more. As an aside, the king of Prussia empowered a committee to take inventory of Hamborn abbey's assets following the 1802 / 1803 "Reichsdeputationshauptschluss" in 1804, having the intention to suppress the monastery in favor of "more useful purposes." The actual suppression, however, only occurred in the year 1806 under the grand duke of Berg, Joachim Murat, who was Napoleon's brother-in-law. The Abbey though preserved had a twilight existence, until it was restored in 1959 to the religious community of Abtei Hamborn. Düsseldorf sits 20 air miles away, upstream (and south) on the Rhine from Duisburg. Both cities are on the right bank (descending). Düsseldorf is the capital city of the German state of North Rhine-Westphalia, resting in the economic heart of Germany. In contrast to the Ruhr, a small river Düssel flowed into the Rhine, a swampy area, sparsley populated well into the 8th Century, a real-life backwater. In 1186 Düsseldorf came under the rule of Berg. The counts of Berg moved their seat of power to the town in 1280. On August 14, 1288 was the day that the sovereign Count Adolf V of Berg granted the village Town privileges. In fact, the custom of turning cartwheels is credited to the children of Düsseldorf, who upon hearing that their city was victorious, they did these end-over-end "flips" in celebration. http://en.wikipedia.org/wiki/Düsseldorf

In 1609, the ducal line of Jülich-Berg-Cleves died out, and after the usual struggle over succession, Jülich and Berg fell to the Wittelsbach Counts of Palatinate-Neuburg. They made Düsseldorf their main domicile. They inherited the Palatinate, in 1685, becoming now Prince-electors as the Electors Palatine. Düsseldorf was now definitely on the map. The commercial rivalry between Cologne and Düsseldorf was swinging in Düsseldorf's favor. After the defeat of Napoleon, the whole Rhineland including Berg was given to the Kingdom of Prussia (1815). The parliament of the Rhine Province was established in Düsseldorf somewhat later. Never-the-less, the gains of the 19th century were reduced to rubble by the end of World War II.

Art-loving Elector Jan Wellem and his wife Anna Maria Luisa de' Medici of Tuscany, were the patrons of Düsseldorf's first significant cultural activities in the 17th and 18th centuries. Heinrich Heine, whose 200th birthday was celebrated in 1997, Clara and Robert Schumann as well as Felix Mendelssohn are the most prominent artists related to the city. Artistic impulses often arose from the Academy of Fine Arts, and the names of Paul Klee, Joseph Beuys, Gerhard Richter as well as Albert Bierstadt (a German-American painter (Hudson River School) best known for his large western landscapes) are associated with this institution.

To the east of Duisburg (up river on the Ruhr) are Essen, Bochum and then Dortmund. Dortmund is the largest city on the Ruhr with about 600 thousand inhabitants. Technically Dortmund is on the Emscher and the Ruhr is just south of town. Nearly half the municipal territory consists of waterways, woodland, agriculture and green spacious parks such as Westfalenpark and the Rombergpark. This condition today contrasts with nearly a hundred years of extensive coal mining and steel milling within the city limits. Dortmund was an Imperial Free City in the Lower Rhenish-Westphalian Circle until 1802, when it became an exclave of the Principality of Orange-Nassau. In 1806 it became part of the Grand Duchy of Berg. After the defeat of Napoleon Bonaparte in 1815, Dortmund was included within the Prussian Province of Westphalia. http://en.wikipedia.org/wiki/Dortmund

Dortmund still retains the outline of its medieval heritage. A ring road marks where the city wall once rose, and the Westen- / Ostenhellweg (part of a medieval salt trading route that crossed the Rhein at Duisburg), is still the major street bisecting the city-centre. Within the ring is the site of the Reinoldikirche, built about 800 AD, during Charlemagne's rule. The current edifice on the spot, built between 1250 and 1270, has been restored since World War II. Reinoldikirche has a 112 m Gothic tower once known as the Wonder of Westphalia. The church also was largely rebuilt after an earthquake in 1661. Petrikirche, a Protestant church, dates from the 14th century (rebuilt after World War II). It is famous for the huge carved Flemic altar known as the Golden Miracle of Dortmund (1521). It consists of 633 gilt carved oak figures depicting 30 scenes about Easter. Marienkirche, also a Protestant church today, originally was built in 1170-1200 (rebuilt after World War II). Its altar dates from 1420. 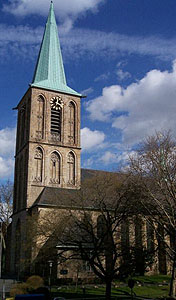 And if these are not enough, in Bochum (to the west) is Propsteikirche St. Peter und Paul, the most ancient church of the city, built in 785-800 by Charlemagne. It was rebuilt in the 11th century but had to be reconstructed starting from 1547, after a fire in 1517, in late-Gothic style. The 68 m-high bell tower is one of the landmarks of Bochum. the interior include an 1175 baptismal font, the relic shrine of Ste. Perpetua and her slave Felicitas, and a high altar with a carved Crucifix from 1352. Others include Pauluskirche, the main Protestant church of the city (built in the 1650 with donations from throughout Northern Europe); the neo-Gothic Marienkirche (1868-1872); Liebfrauen Kirche; a church dedicated to Saint Vincent (c. 1000) and more. Saint Vincent was at first an example of Ottonian architecture, but was rebuilt in Romanesque style, and yet later turned into a Gothic edifice. In 1905 its neo-Gothic section was added. It houses a Baroque altar (1699) and an even older 16th century organ. Blog Bochum (auf Deutsch) ist HIER

DORTMUNDER ("dort-moon-der") is a Westphalian lager that originated in Germany's steel and coal district along the River Ruhr in the 19th century. Dortmunder is a full-bodied, moderately hopped beer of at least 5% alcohol by volume. It became the favorite quaff of coal miners and heavy industry workers in the first half of the 20th century. The full story is HERE. By the early Middle Ages, brewing had become an exclusive privilege of the clergy and nobility. After the emergence of a mercantile class, monopoly privilege eroded. The private burghers of the city of Dortmund became some of the first "civilian" subjects to receive the license to brew, conferred upon them by the German King Adolf of Nassau on August 22, 1293. Dortmund has never relinquished this right. http://www.realbeer.com/library/authors/dornbusch-h/dortmunder.php (virtually the same article) Auf dem Original-Fundament des Wachturms aus dem 14. Jahrhundert zeigt der Adlerturm (Dortmund) auf sechs Etagen mittelalterliche Stadtgeschichte und insbesondere die Geschichte der Stadtbefestigung. http://www.dortmund.city-map.de/city/db/044402011300.html

East of Dortmund one comes to Soest, another ancient Hanseatic city with over a thousand years of history before the 20th Century. In the Middle Ages it already become the second or third largest city in greater Germany. Mentioned in documents for the first time only in the year 836AD, Soest belonged to an older chain of settlements existing back to 600 AD.

Christian Rohlfs was a traditional painter at the turn of the 20th Century; however, the influence of Edvard Munch and Emil Nolde and an experience of seeing the works of painters such as Vincent van Gogh first-hand, influenced him towards a more expressionist style, in which he would work for the rest of his career. The two of his paintings shown above demonstrate the progression of his style. they are about 7 years apart. Both feature Soest. Rohlfs lived in Hagen (south of Dortmund) during this time. Rohlfs style was out of favor with the Nazis and he died shortly before the war in 1938 with most of his works removed in Germany. http://www.museothyssen.org/en/thyssen/ficha_artista/630