The 2012 Tour de France ended the 14th Stage in Foix. The riveting views of the town are still a vivid memory from prior years (e.g. 2008). The Romans built a fort on a rocky hill where the Château de Foix castle now dominates the town. The town of Foix probably owes its origin to an oratory founded by Charlemagne. It afterwards became the Abbey of Saint Volusianus in 849. It sits along the foothills of the Pyrenees which go from the North West to the South East in the most southern portion of France (about halfway between the Atlantic and Mediterranean coasts).

The Order of St. Augustine took possession of the abbey church of Saint Volusien and its monastery in 1104. The monastery housing the relics of this saint. Thereafter, came the construction of a much larger church with three naves and a transept. In the fourteenth century, the Romanesque apse was replaced by a new chorus with a polygonal shape. Unfortunately, the building was destroyed during the Wars of Religion and the relics lost. The reconstruction, begun in 1609, was probably completed 60 years later. What remains of the medieval church, is primarily its portal and the base of a few walls. Fermis built the organ built by Fermis in 1869 (restored in 2007).

Of the original chapel at Montgauzy, nothing remains. It commemorated the victory of Charlemagne over the Moors in 778. The chapel became a place of pilgrimage. In 1340, the Bishop of Pamiers, Arnaud de Villemur, is reported to have intervened because of rowdiness. On January 4, 1562, the chapel, one of many targets of reform, was effectively closed, and in 1579 the governor of the castle of Foix had it demolished. It was rebuilt in 1628 and the pilgrimage resumed. During the Revolution, it was sold (1791), where it was not maintained under private hands. In 1840 the government took over. A Normal School is located in the area and in 1843 the chapel was reopened for worship. By 1883, itb was closed again and its the furnishings scattered. After repairs in 1943, it again reopened for worship.

Previously the capital of the County of Foix, and today situated at the heart of the department of Ariège, the town of Foix is best known by the three differently-shaped towers of its castle. Standing atop a steep and rocky perch, the fortification (from the 10th-15th centuries) recalls the Counts of Foix (and Viscounts of Béarn), notably the flamboyant Gaston Phœbus (1343-1391), who composed a livre des oraisons (Book of Prayer) and livre de la chasse, a writing related to the hunt. A statue of Gaston stands outside the Château de Pau. Foix remains a small town, but it benefits from the nearby Toulouse (north), Spain and Andorra (south). More pictures from and information about Foix -- here & here. 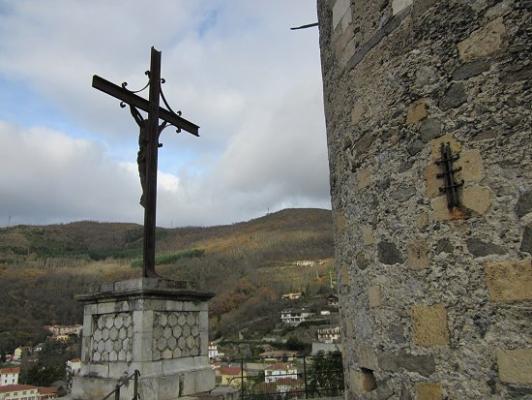 About halfway on the day's course in 2012, at Tarascon-sur-Ariège (Tarascon d'Arièja) was la tour du Castella (seen well on the 2012 Tour broadcast). It represents the remains (though rebuilt) from an original fortification along the river at the highest point in town (from 1775). The current tower sits upon the dungeon of an older build on the famous rock (Rocher or Roque) in the Ariège. http://tarasconportedesmontagnes.over-blog.com/article-la-tour-du-castella-de-tarascon-sur-ariege-45864641.html Julius Caesar in his book "De Bello Gallico" mentions Tarusconienses. Charlemagne's troops had a victory, in 778, against the moslem invaders (Saracens) at a nearby place called Pré Lombard. The region continued to change hands. Thus the castle of Tarascon (Ariège) became part of the general fortifications throughout the County of Foix. The city Charter of customs and liberties was granted to the town of Tarascon-sur-Ariège by Raymond Roger in July 1217, to those who came to settle permanently and build below the Castella. The year 1382 witnessed the construction of the steeple of the town's church edicated to Saint Michel (of which only the tower remains). Tarascon-sur-Ariège was the scene of major conflicts during the religious wars of the 16th century and remains a symbol of the carnage that ensued as the town changed hands. Taken by the Protestant Daudou in 1568, it was recovered by the Catholics troops of the Sieur de Montgascon in 1569 (at the time they executed the towns leadership, including Pastor by throuwing them off the Rock into the river). After about a dozen years Tarascon-sur-Ariège finally was retaken by Daudou again in 1582. It aligned itself with the fortunes of Henri, who became the first Bourbon King of France. However in 1662, a later King had the castle fort torn down (as it was no longer needed). http://www.histariege.com/tarascon.htm (français) see generally http://www.francethisway.com/places/a/tarascon-sur-ariege-ariege.php

The Kingdom of Navarre was one of the Christian kingdoms to emerge in northern Spain after the Muslim conquest had ended in the 8th century, in addition to Asturias, Leon, Castile and Aragon. It had encompassed regions north and south of the Pyrénées. When the local dynasty died out, the counts of Champagne inherited it. One heiress, Jeanne, married the King of France, Philippe IV (d. 1314). The kingdom of Navarre passed by marriage to Aragon in 1425, then to Foix in 1480, then it merged into the then powerful Albret holdings. In 1512, the part of the kingdom south of the mountains broke off, lost by the Spanish reConquista. Then, by a quirk of fate and much fighting (rights of succession being contested by force), France and Navarre reunited. Pau was the birthplace (December 13, 1553) of Prince Henry of Navarre (d.1610). Henri IV had become the King of Navarre by right of his mother Jeanne d'Albret (1572), who had become the political force behind the French Protestant movement. He took up that standard for a while. Navarre acceded to France when he became King of France by his father's right (House of Bourbon) in 1589. http://www.heraldica.org/topics/france/navarre.htm

It was more complicated than that, the times affected by the period of Protestant Reformation. Protestant King Henry of Navarre became Catholic King Henry IV of France to calm the fears of excommunication by the general public and the nation's nobility, {http://www.musee-chateau-pau.fr/homes/home_id20468_u1l2.htm}. He became the first of the Bourbon Kings. He may be best remembered for the Edict of Nantes, which ended the Wars of Religion in France, as well as giving some measure of freedom to worship. He remarked to the local notables, as he left Pau to become Roi of all France, that he was not giving Béarn to France, he was giving France to Béarn. His son finished the job of consolidating the southern kingdom into France, but in doing so lost his father's love and respect for Protestant freedoms. Some say it was the excesses of the Wars of religion, as much as the economic excesses of the later French Kings and their nobility that caused the anti-cleric sentiment behind the French Revolution.

As mentioned above, the Wars of Religion caused great destruction in this region. Afterwards, there was a conference to settle differences about Church property much damaged in all the fighting. In that council (Synod of Ste-Foy in Agen), Saint Michael was returned to Catholic control, whereas the Protestant claim to the nearby Notre Dame de la DAURADE (a daurade is a sea bream, but that' is not the story of the name) was confirmed. This church, formerly dedicated to St. Paul, had served as a parish church in the first medieval village. It was rebuilt during the reign of Henry II (1547-1559), on the ruins of an older structure (11th century). It takes its name, the Daourado, which means in native language d'oc or "the gold",because of the golden statue that adorns the chapel on one side. Much of the rebuilding of the structure in later years, however, was due to Catholic control, which returned in 1599. This church today is in its entirety paneled totally in regional walnut. Of the old church, there remains only the entrance gate of two broken arches, rebuilt in the 18th century and inspired by the 13th century-style. http://tarasconportedesmontagnes.over-blog.com/article-visite-de-tarascon-sur-ariege-2-61784899.html

A square-shaped tower is the only remnant of the ancient Church of St. Michael, the portion of the structure under construction in 1382. The church served as the cemetery chapel (located on both sides). The toower also functioned defensively role as part of the fortifications of the city. Note that the choice of the dedication to St. Michael hints at its military role. The Arch-angel Michael was a holy warrior, often adopted in the Middle Ages for this kind of use.

The facility, occupied by the Catholics in 1561, became the sole sanctuary for the celebration of Mass until March 2, 1599. On that date the main church of "Our Lady" was returned to the Catholic Church and the St. Michael structure became only a cemetery chapel. What remains today, the tower, is visible from afar (like the fortification tower of the castle). Recent excavations have uncovered Merovingian tombs or sarcophagi, confirming the antiquity and importance of the site shrine to St. Michael in post-Roman times. A more complete tower can be observed on some early postcards even as late as the 20th century; never-the-less, today the roof of the tower has vanished. The destruction of the main church dates to the second half of the 18th century. Before then, it consisted of a nave and two aisles of unequal length terminating in a straight wall (all predating the 14th century tower, although repaired in the 16th). The nave and north aisle seem to have had three bays, while the south side, the backside had only two. According to legend the mysterious carved head on today's tower, indicates the direction of the Holy Grail. A similar head carved (by the same mason) exists in Foix. See also http://france.jeditoo.com/MidiPyr/ariege.htm

In contrast stands the Church of our Lady at Sabart, which today occupies a portion of a backwater area of the town. Legend states that Charlemagne himself and his troops defeated the Moors on this spot. After the battle, the emperor discovered the statue of a black Madonna. If true, that discovery would suggest an important shrine predating the moslem occupation. Charlemagne built a chapel to house the relic. A 1967 discovery of two sarcophagi, containing the remains of Carolingian soldiers, would seem to confirm that the troops of Charlemagne in 778 fought the infidels in the area. So thus was born the chapel dedicated to Our Lady of Victory. It was much destroyed in the 16th century, rebuilt, then destroyed during the French Revolution. Today it serves as a pilgrimage objective (September 8th). http://japy-collection.fr/131.php