On April 13, 1598 in Nantes, the French King, Henri IV (and Prince of Navarre), formally signed the document that will be known by history as the «Edict of Nantes». Even though the Edict of Nantes did not put an end to the pogroms and the persecutions, whose victims were the Protestant believers of France - they would begin again with more force in second half of 17th Century - the edict did terminate what has become known as the Wars of Religion, while legally (for a time at least) fixing the status of these reformers in the Kingdom. It is to Nantes glory to have associated its name with one of the most far reaching acts of religious tolerance in history.

In 1998, Nantes celebrated the anniversary of the signature of this legal document, emblematic of freedom. Several expositions for this occasion, coproduced by the museum in the castle of the City of Nantes and the National Museum of Pau (in collaboration also with the City of LaRochelle), had as their subject "France under Henri IV". This was the principal French "National Celebration".

In April of 1598, the rupture between Catholic and Protestant believers of France, going back forty years, was temporarily bandaged. The Kingdom had been devastated. France lost several million children, women and men (four million according to Marièjol as cited in Les guerres de religion, Pierre Miquel, p396). The civil and religious disorders, which had ceased as of 1589, were reopened by the revolution led by Henri of Navarre, who became Henry IV, the first Bourbon ruler of France, after the assassination of the last Valois King in 1589, with the assistance of Catholic as well as Huguenots, against the members of an opposition league, led by the Duke of Mercoeur who controlled Brittany at that time.

It is in this context that the Edict of Nantes was signed, after being negotiated for nearly two years, by the royal police chiefs and the representatives of the political organization of the Huguenots. This Protestant organization had been constituted, after the St. Bartholomew's Day Massacre, at a southern-most base, which was then extended at the time of the national Sainte-Foy synod to all of France.

This "perpetual and irrevocable" legislative text proclaimed a total freedom of conscience and made a full end to the former religious "clauses" preventing the access to the lands, legal functions and the trades. On the other hand, the freedom of worship was limited to the places where each one had "celebrated" from 1596 until August 1597, at the strongholds of the lords high-dispensers of justice and, under certain other conditions, for instance at two cities by license. Moreover, certain cities were completely prohibited from having within the Huguenot method of worship: the traditional episcopal cities (bishoprics), Paris and a certain number of liege cities.

On the civil level, the reformers obtained monarchial approval to be regarded as having a right to self-defense - one can also say a "State". The authority of the Protestant clergy in those areas also was expressly recognized as having obtained the same level as the authorities of the Catholic Church . The Huguenots received specific legal rights and direct access to the civil courts. They also were granted legal title to various places of refuge, that is a number of named castles, cities or villages (150). For those designated places of safety, the sovereign committed himself to appoint Protestant governors and to pay the expenses for maintaining the garrison. Finally, the Protestants were authorized to hold assemblies to discuss the amount of the subsidies, that is taxes, they would pay to the Crown! (articles 43 of the "Secrecies").

Thus, the Edict of Nantes terminated religious fighting by clearly establishing - legally - the status of the Protestants in France; but, this necessarily separated them from the other subjects of the King. The Edict of Nantes, in effect, has created a "State within a State". Thereafter, the existence of this particular status will have significant consequences, because it runs up against the will of the integrationists and of the future Bourbon sovereigns, who wish to consolidate and expand the absolutist power of the French State.

Consequently, at the death of Henri IV, threats quickly emerge, aiming to eradicate the political privileges of the Protestant leaders. Later, in second half of 17th century, the pogroms and persecutions renew against the common people. This culminates in the hostility of the Parliament, which soon will "defend" the need for religious unity in the Kingdom, that of Richelieu who will abolish the military privileges upon the Peace of Alès (1629) and that of Louis XIV (the Sun King) who finally will revoke the Edict in 1685, claiming that this is what his grandfather had intended all along. Nevertheless, in spite of its weakness in the face of an absolutest monarchy, the Edict of Nantes remains unique in the history of continental Europe, and, perhaps, is only surpassed in the original protections, which were afforded to persons in the United States under the US Constitution.

Upon entering Nantes, April 13 1598, Henri IV came to take possession of the city-fort, after "its tender" by the Duke of Mercoeur. Thus, the castle of the Duke of Brittany became the setting for the signing of the Edict, on April 30th. Perhaps, there is no room for pride under these circumstances, but never-the-less Nantes is time-honoured to have associated with its name the most important of political acts of European history: a declaration of tolerance which recognized legally, for the first time, freedom of conscience. Est-ce que c'est par leçon que nous devons continuellement apprendre? 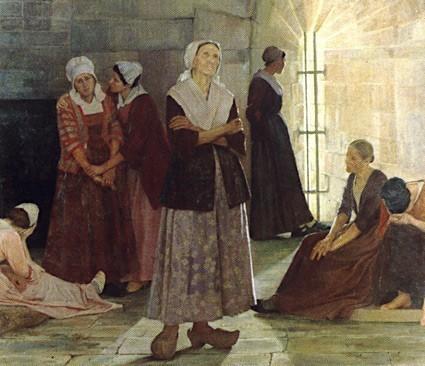 One is tempted to think that the persecutions in France died out after Louis XIV, but that would be an unfortunate conclusion. For instance consider the life of poor Marie Durand (1712-1776), La prisonnière de la Tour de Constance à Aigues-Mortes, dans l' Ardèche. Rich in Spirit, imprisoned at age 18 (August 25, 1730), she would spend 38 years in jail, along with many others because of her Protestant beliefs. Le 14 Avril 1768 -- Toutes les prisonnières de la Tour sont libérées. The release came inspite instructions from the Royal Government to the contrary, and in 1787, finally, and Edict of Tolerance was rendered. Soon, thereafter, all faiths would come under fire during the Revolution in France. Protestant ou catholique, l'Ardéchois (dans l' Ardèche ajourd'hui) a mené un combat incessant pour affirmer sa foi: http://medarus.org/Ardeche/07celebr/07celTex/durandpem.html