Mâcon sits astride the Saône River, north of Lyon. The foundation of ancient Matisco dates to the 2nd century B.C. The city became a busy crossroad. Formerly the capital of the Mâconnais, now of the Department of Saône-et-Loire, became a Gallo-Roman civitas (city state) in the fifth century AD, when separated from its historic place in Æduan territory. Christianity appears to have been introduced from Lugdunum (present Lyon) into this city at an early period. Hugh, Archbishop of Lyon, in the eleventh century, would call Mâcon "the eldest daughter of the Church of Lyon." The existence of Mâcon as a separate diocese ended at the French Revolution, and the former bishopric of Mâcon was subsumed by the Bishop of Autun, into whose diocese it merged. Interestingly, Napoleon I's foreign minister, Charles Maurice de Talleyrand-Périgord, was the sometime Bishop of Autun.

The first bishop historically known is Saint Placidus (538-55). The authentic list of his successors, as reconstructed by Duchesne, comprises several bishops venerated as Saints: Florentinus (c. 561); Cælodonius, who assisted at the Council of Lyon ending in 570; Eusebius, who assisted at two councils in the city, in 581 and 585. Tradition adds to this list the names of Saints Salvinius, Nicetius (Nizier) and Justus, as bishops of Mâcon in the course of the sixth century. Among other bishops of later date may be mentioned Saint Gerard (886-926), who died in a hermitage at Brou near Bourg-en-Bresse, and Cardinal Philibert Hugonet (1473-84).


The wars of religion filled Mâcon with blood; it was captured on 5 May, 1562, by the Protestant d'Entragues, on 18 August, 1562, by the Catholic Tavannes, on 29 September 1567, it again fell into the hands of the Protestants, and on 4 December 1567, was recovered by the Catholics. But the Protestants of Mâcon were saved from the Massacre of St. Bartholomew (August 24, 1572), probably by the passive resistance with which the bailiff, Philibert de Laguiche, met the orders of king Charles IX of France. Odet de Coligny, known as Cardinal de Châtillon, who eventually became a Protestant and went to London to marry under the name of Comte de Beauvais, was from 1554 to 1560 prior, and after 1560 provost, of St-Pierre de Mâcon (pictured at the right). Close to the main bridge across the river is the old Saint-Vincent Cathedral. The diocese was founded in the 6th century. Today, only the narthex, the two towers and the intervening bay of the most recent church remain. The panoramic view point from the southern tower offers a spectacular view of Mâcon and the Saône valley. The structure now a symbolizes Mâcon. See Histoire de l'Eglise réformée de Mâcon {http://web.archive.org/web/20070507123522/http://pros.orange.fr/darreau.com/EREFM/histoire.html} & http://en.wikipedia.org/wiki/Ancient_Diocese_of_Mâcon

Mâcon was the border between the Kingdom of France and the Holy Roman Empire from 843 to 1600. For many centuries the bishops seem to have been the only local authority in Mâcon. The district had no Compte until after 850. From 926 the countship became an entitlement (hereditary). The Mâconnais became a royal property when sold to King and Saint Louis IX in 1239 by Alix de Bourgogne, daughter of the final count (Géraud II, comte de Mâcon et de Vienne), and her husband, Jean de Dreux (aka Jean de Braine and the King's cousin). In 1435 Charles VII of France, by the Treaty of Arras, ceded it to Philip, Duke of Burgundy, but in 1477 it reverted to France, upon the death of duke Charles the Bold. Emperor Charles V definitively recognized the Mâconnais as French at the Treaty of Cambrai in 1529. Mâcon prospered inspite of different owners from the trade and duties. Le Mâconnais Beaujolais (Pictures-Crêches-sur-Saône et sa région)

Daniel Barraud's Mâcon-Vergisson La Roche hails from a plot of old vines that essentially continue Pouilly-Fuissé La Roche, but in the village of Vergisson, a little more north. It too is a high-altitude, rocky, south-easterly facing slope, with underlying limestone less than half a meter below the surface. The Chardonnay grape accounts for about two-thirds of the Mâconnais wine produced and, some say, all of the Mâconnais wine that is worth drinking.

Also an Æduan city, Autun (NW of Mâcon and SW of Dijon) boasts two ancient Roman gates (the Porte St.-André and Porte d'Arroux) and other ruins dating to the time of Augustus (Augustodonum). One of the most impressive Roman remains is that of Augustodonum's theatre, seating 17-20 thousand. Autun has a major Romanesque-style Cathédrale dating from the early twelfth century, which was formerly the chapel of the Dukes of Burgundy; their palace was the actual episcopal residence. Saint Lazare cathedral, famous for its incredible architectural sculptures, particularly the tympanum of The Last Judgment, was originally built as a pilgrimage church dedicated to the veneration of the relics of Lazarus, whom Christ raised from the dead (John 11:43-44), and whose relics were said to be there. By the 16th century, the cathedral at Narbonne, also had the relics of Lazarus. http://www.france-for-visitors.com/burgundy/morvan/autun-town.html

On August 22, 725, moslem invaders captured Autun after defeating forces led by the local bishop. This is far as they got. Seven years later the Battle of Tours ensured French freedom. Autun is 30 miles from the Côte de Beaune wine growing district. Some very fine Pinot Noir, as well as white wine is grown on the southern half of the escarpment of the Côte d'Or. There is a wider variety of accommodation in Autun than in Beaune, with a less-expensive and more Spartan selection near the Gare on Avenue de la République. See also Lycée militaire d'Autun

East of Autun, just SW of Beaune, is La Rochepot, with its restored colorful château overlooking a quiet village. A visitor can see the ruins of the structure built in the 11th century by Alexander of Burgundy that sat originally on the hillside and later burned. During the French Revolution, Château de La Rochepot became Château de la Roche Fidèle (the Castle of the Faithful Rock); then it was declared a national property, later acquired by persons who tore down part of its buildings, stone by stone. Among the Châteaux of France, La Rochepot as it stands today after faithful restoration, represents a most evocative example of a Middle Age fortress. 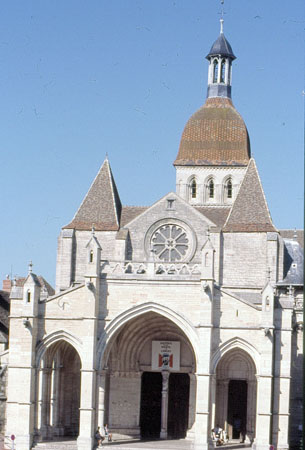 Beaune (department of Cote-d'Or) is a well-promoted capital of the Bourgogne wine region, generally and the Côte de Beaune, specifically. And then there are the more than 100 châteaux: http://www.burgundyeye.com/. The Saint Vincent Tournante is an integral part of the long and illustrious tradition of wine and winegrowers in Burgundy. The 2009 festival will take place on January 24th & 25th in the villages of Chardonnay, Pierreclos and in Mâcon. The Saint-Vincent Tournante is the regional culmination of festivities held the previous week in wine growing villages throughout Burgundy.

Beaune was a fortified Roman camp and a stronghold during the middle ages. Beaune's importance grew after the destruction of the city of Autun in the 6th century, and Gregory of Tours' no holds barred history of France, written in 570, already documented its importance in the Frankish culture of the vine. Notable buildings in the still-walled town include two 12-13th century churches and a hospital (Saint-Esprit), founded in 1443. Beaune was the capital of a separate duchy under Charlemagne (742-814), but was united with Burgundy in 1227, becoming the first seat of the Burgundian parliament. Beaune was a Protestant town. After the revocation of the Edict of Nantes, it suffered the loss of its cloth trade. http://www.1911encyclopedia.org/Beaune