Shown below, right: US Brig Rajah of Beverly {Salem, Massachusetts} -- Captain Josiah Lovett: There was a 120 ton ship (built secretly for the pepper trade circa 1795 sailing at least until 1808) and a larger vessel (maiden voyage circa 1818 -- 250 tons on the route to Sumatra via Marseille). This picture is attributed to the heavier one; but note the US Flag, which looks to be from an earlier time. The painting is thought to be by Antoine Roux, Jr. (1799-1872). Several French artists of ships bear the Roux name, and Antoine Roux, Sr. was very famous and could have done this picture, too. The painting probably was based on a stop at Marseilles.

Marseille is France's oldest and one of its largest cities. The "Old Port" (Vieux Port) sits below l'église (basilique) Notre-Dame-de-la-Garde, (Basilica (Church) of Our Lady of the Guard), which overlooks the city (7th arrondissement), founded at the beginning of the fifth century by St Jean CASSIEN (who came from the mouth of the Danube) in honour of Saint Victor, a third century martyr. The Cathedral of Sainte-Marie-Majeure or just la Major, was founded in the 4th century, enlarged in the 11th century and completely rebuilt in the second half of the 19th century by the architects Léon Vaudoyer and Jacques Henri Esperandieu. The present-day cathedral is a gigantic edifice in a Romano-Byzantine style. A romanesque transept, choir and altar survive from the older medieval cathedral, spared from complete destruction only as a result of public protests at the time. The 12th Century parish church of Saint-Laurent and the adjoining 17th Century chapel of Sainte-Catherine, on the quayside (near the Cathedral), recently reopened after restoration.

Marseille, the oldest city of France, was founded in 600 BC by Greeks from Phocæa (as mentioned by Thucydides Bk1,13) as a trading port under the name Massalia. The coastline of France (and Spain and Italy) had several Greek colonies at this time or trading purposes (wine, chief among the produits). Facing an opposing alliance of the Etruscans, Carthage and the Celts, the Greek colony allied itself with the expanding Roman Republic for protection. This led to Roman Occupation, when Cæsar conquered Gaul, when it joined the losing side (Pompey and the optimates) in civil war, and lost its independence in 49 BC. During the ensuing Roman times, the city was called Massilia. According to provençal tradition, Mary Magdalen evangelised Marseille along with Lazarus. The diocese of Marseille was in fact set up early (first century AD), but not until 1948 did it become the Archdiocese of Marseille.

The city's fortunes wained and ebbed during the centuries that followed. Marseille was united with Provence in 1481 and then incorporated in France the following year, but soon acquired a reputation for rebelling against the central royal government. As a consequence, the two forts of St Jean and St Nicholas were erected to guard the main harbor and marina of the city, and a large fleet and arsenal were maintained in the harbour itself to assure loyalty. By the 18th Century Marseille had become France's leading military port in the Mediterranean. The local population enthusiastically embraced the French Revolution and sent 500 volunteers to Paris in 1792 to defend the revolutionary government; their rallying call to revolution, sung on their march from Marseille to Paris, became known as La Marseillaise, now the national anthem of France, eventhough written in Strasbourg for another purpose.

During World War II, Marseille was bombed by the German and the Italian forces in 1940. The city was occupied by Germans from November 1942 to August 1944. A large part of the city's old quarter was dynamited in a massive clearance project, aimed to reduce opportunities for resistance members to hide and operate in the densely populated old buildings. From the 1950s onward, the city served as an entrance port for over a million immigrants to France, especially from Algeria. http://en.wikipedia.org/wiki/Marseille 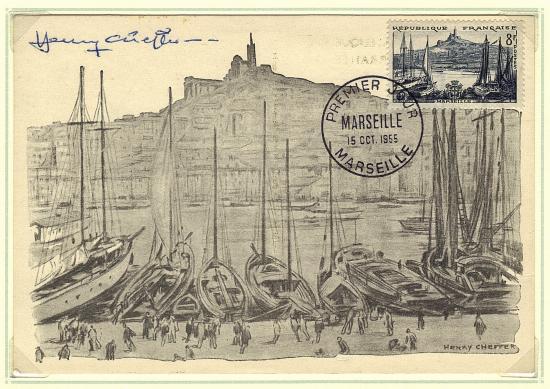 Key locations in Marseille: There, on the Lacydon (which was at that time a deep cove) the city was born 26 centuries ago. Greek sailors, Phoenician traders and later Romans, in ancient times, were attracted to the grandeur and beauty of the site. According to legend, a leader was chosen as Protis Gyptis who became husband to the daughter of the kingof the Segobriges. This initial wedding symbolized the union with the broader Mediterranean and Marseille, welcoming the stranger who arrives at the shore of Lacydon. These pioneers, bold men, created multiple trading posts all along the coast of Languedoc and the eastern coast of Spanish peninsula. This place still is a meeting place and must walk for those in Marseilles. In fact it is one of three best-known places for tourists (the others being to Notre Dame de la Garde and the Canebière).

Gare Saint-Charles is also one of the main terminal stations for the TGV in the south of France making Marseilles reachable in three hours from Paris (a distance of over 750 km). and just over one and a half hours from Lyon. There is also a direct TGV line to Strasbourg. The first phase of a new tramway, going eastwards from the port towards St Barnabé, was opened in July 2007. It compliments an extensive bus and Métro train system. The 2009 Tour de France began its third stage on Monday at the old Harbor in Marseille. Racing north and west, the Tour crossed the Rhône at Arles (Bouches-du-Rhône department, in the historique Camargue region, an old Greek and Roman area).