New York City, November 17, 2004: At the height of the 18th century, the most glorious kingdom in Europe would face a mighty foe--the power of its own subjects. One man would rise to lead the people to cast aside a hated King and Queen. A new republic would be born in blood--the blood of the French Revolution. The two hour World Premiere, THE FRENCH REVOLUTION examined a transforming event of Western Civilization {Monday, January 17 on The History Channel}.

THE FRENCH REVOLUTION is a two-hour documentary. It introduced viewers to key personalities, starting at the top with King Louis XVI and his Queen, Marie Antoinette. They ruled unaware of the depth of anger of their subjects. The other players included, Maximillian Robespierre, the lawyer turned revolutionary who resorted to violence to preserve the new Republic; his ally, Georges Danton, whose eventual demands to stop the violence would lead to Danton's own destruction (Show my head to the people, it is worth seeing); Jean-Paul Marat, the journalist who fanned the flames of terror in France and would be turned into a martyr; and Charlotte Corday, the young Girondist who executed Marat. She had felt that Jean-Paul, who daily demanded more and more heads, was in large part responsible for the misfortunes that the French people were undergoing. 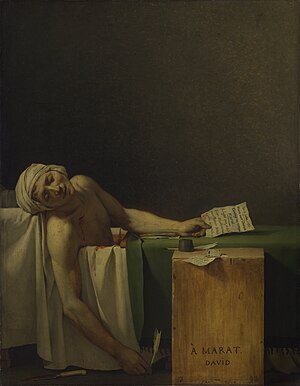 Jean-Paul Marat was born in a small village, Boudry, not far from Neuchâtel, in Switzerland -- see Boudry aujourd'hui. His father, a Sardinian born former Roman Catholic priest, had given up the ministry, moved to Calvinist Switzerland and became Protestant. There he had married a young woman whose Protestant grand-parents had fled France to escape earlier religious persecutions.

The then wealthiest nation, 18th Century France, had the most powerful King, the best-educated population and the strongest army in Europe. However, a perfect storm of discontent was brewing. On one hand, King Louis XVI and his wife, Marie Antoinette, lived a decadent lifestyle in their Versailles palace outside Paris. On the other hand, the ideal of equality, arising during from the Age of Enlightenment, was taking form within the City of Light (and elsewhere). The French economy headed south, due to impacts from aiding the Americans against France's bitter enemy, England, and the European war it spawned. On top of that a bitter winter and a poor harvest had left the average citizen hungry and growing increasingly resentful. Anger turned into rage; rage turned into violence.

The History Channel's FRENCH REVOLUTION takes viewers through the dramatic step-by-step escalation of the Révolution française, from the formation of the National Assembly to the storming of the Bastille; from the women's march on Versailles to the detainment of the royal family. The program follows Robespierre's growing fanaticism. Once a radical anti-capital punishment crusader, he decided that in order for the nation to move forward, bold steps had to be taken. The king, and all who stood in the way of Robespierre's vision for a new Republic based on virtue and equality, must be executed by the guillotine in a time known as The Reign of Terror, or just the Terror. The documentary chronicles how this regime resorted to extremes that re-crafted the revolution into a realm in which neighbor feared neighbor, the Catholic Church was demolished and thousands were put to death. This state of affairs eventually would cause Robespierre's own demise, branded a fanatic in the annals of history. {see also in comparison The Religious Wars of 16th Century France (hundreds of thousands of Huguenots murdered)}

After Robespierre's execution in 1794, France entered a 5-year period of uncertainty, frozen between fear of more terror and, worse yet, a return to the oppressive monarchy. The Terror may have died with Robespierre, but the effects of the Révolution would continue. After these five stagnant years had passed, the state power of France once again consolidated behind a single person, Napoleon Bonaparte.

Back to our History-based Newsletter