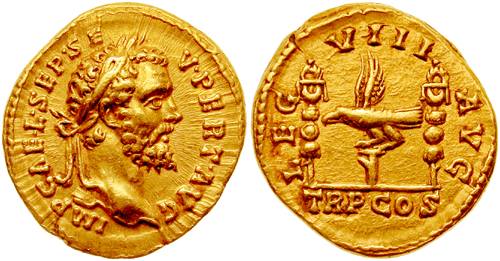 In 12 BC, at the site of today's Strasbourg, the Romans established a military outpost and named it Argentoratum (situated on the Grande Île). The Alemanni fought a battle for Argentoratum against Rome in 357. They were defeated by general Julian, later an Emperor of Rome. The victors took the Alemanni king Chonodomarius as prisoner. On January 2, 366 the Alemanni again crossed the frozen Rhine in large numbers, to invade the Roman Empire. Early in the 5th century the Alemanni appear to have crossed the Rhine, conquered, and then settled what is today Alsace (Elaß) as well as a large part of Switzerland. The town was occupied successively in the 5th century by Alemanni, Huns, and Franks.

A more detailed church-related history: According to legend the Diocese of Strasburg was founded in the third or fourth century. St. Arbogast and Florentius were distinguished bishops of the sixth or seventh century. Florentius was an Irish-born bishop of Strasbourg, France. In Alsace he first lived as a hermit on Mount Ringelberg. After curing the blind and deaf daughter of St. King Dagobert II, he had the king’s patronage. He was appointed the bishop of Strasbourg (678) and founded (with the King's help) the monastery of St. Thomas at Haslach, mostly staffed by the Irish. Image-Icon is HERE

By the Treaty of Verdun (843) the Diocese of Strasbourg fell to the empire of Lothair; in 870 it became part of the east Frankish kingdom, later the Holy Roman Empire, so that the German character of the diocese was preserved from the time of Charlemagne. Both Lothair and Louis the German confirmed the privileges that their forefathers had granted to the Church of Strasbourg. Bishops Udo (950-65) and Erchanbald (965-91) restored Church discipline which had fallen into decay at the beginning of the tenth century. Emperor Otto I granted Udo the ownership of the royal mint at Strasbourg; Otto II (974) confirmed this gift and gave the bishop the right to establish a mint in any town of the diocese he desired. In 982 Otto II granted Erchanbald absolute jurisdiction over the city of Strasbourg and its environs, thus forming the main foundation of the secular supremacy of the bishop.

The city of Strasbourg developed under episcopal administration, and in the twelfth century it prospered greatly. The town-council also acquired greater independence. The populace, siding with the council and the patricians, defeated the episcopal forces at Hausberger, 8 March, 1262, thus practically establishing the independence of the city. The succeeding bishop, Henry of Geroldseck (1263-73), made a treaty in 1263 by which at the close of the official year the council elected its own successors, and the citizens themselves had the right to settle all questions regarding communal property. The bishop retained only the right to appoint the town magistrate, the castellan of the castle, the official in charge of the collection of the customs, and the superintendent of the mint.

Soon after 1520 the Reformation gained many adherents in the city of Strasbourg. Thehe secular lordships of the diocese in Lower Alsace adopted the new doctrine (even part of the cathedral chapter became Protestant), except the landgraviate (who encouraged counter-reformation). The struggle between the two sides, called the Bishops' War of Strasbourg (1592-1604), caused great misery throughout the diocese. Charles of Lorraine was victor. Catholic ownership further was secured in the successive election of two Austrian archdukes as bishop. During the Thirty Years' War the territory was so ravaged by Ernst of Mansfeld, the Swedes, and the French, that the population decreased 75 per cent. In 1680, during the episcopate of Charles Egon of Fürstenberg (1663-82), whose sympathies were French, Louis XIV seized all the territory of the diocese on the left bank of the Rhine under pretense of reunion; the city became a French possession in 1681. Strasbourg's status as a free city was revoked in the French Revolution. During this time, many churches and cloisters were either destroyed or severely damaged. http://www.newadvent.org/cathen/14313c.htm

During the Franco-Prussian War and the Siege of Strasbourg, the city was heavily bombarded by the Prussian army. In 1871 after the war's end, the city was annexed to the newly-established German Empire as part of the Reichsland Elsaß-Lothringen (via the Treaty of Frankfurt) without a plebiscite. As part of Imperial Germany, Strasbourg was rebuilt and developed on a grand and representative scale (the Neue Stadt, or "new city"). Following the defeat of Germany in World War I, the city was returned to France {Treaty of Versailles (1919)}; city residents once again not offered an input into the change. Following the Fall of France in 1940 during World War II, the city was annexed by Nazi Germany. On November 22, 1944, the city was officially liberated by General Leclerc, although he entered the city the next day. http://en.wikipedia.org/wiki/Strasbourg

The most important church of the area is the minster (at Straßburg), the oldest parts of which belong to the eleventh century. The crypt is Romanesque, the upper part of the choir and the transepts belong to a transition period, the nave is fully Gothic in style. The famous façade is the chief work of Erwin of Steinbach (1284-1318). The north tower, about 465 feet high, was completed in 1429-39 by Johann Hültz of Cologne. The minster is rich in stained glass of the period from the twelfth to the fifteenth century. Other churches are: St. Martin at Colmar, St. George at Schlettstadt, St. Theobald at Thann, St. Nicholas at Hagenau, St. Leodegar and the Church of Our Lady at Gebweiler, Old and New St. Peter at Strasbourg, etc. A much frequented places of pilgrimage is Die Drei Aehren near Colmar.

Since 1979, Strasbourg has been the official seat of the European Parliament. Plenary sessions take place in the city each month, but most all other business occurs in Brussels and Luxembourg. Current sessions use the Immeuble Louise Weiss, initiated in 1999. It contains the largest parliamentary assembly room of any democratic institution in the world. Before that, the EP sessions were in the primary building of the Council of Europe, called the Palace of Europe, known for its unusual inside architecture. http://www.strasbourg.fr/accueil 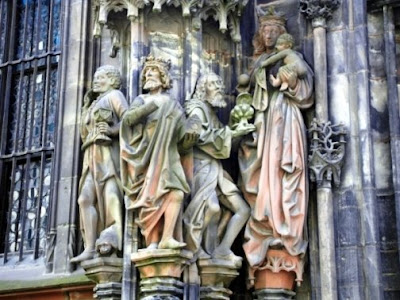 The Wine Route, which begins just west of Strasbourg, meanders through picturesque villages little changed for centuries and ends at Thann (dans la vallée de la thur), near Mulhouse and the German border.

Alsace is a region apart. German in appearance and character but French in spirit and fact, it has captured the best of both. The wines reflect that duality. Two of the three most important grapes, Riesling and Gewurztraminer, are German, while the third, pinot gris, is little planted elsewhere in France. The grapes may be German, but the wine styles lean toward French. http://www.washingtonpost.com/wp-dyn/content/article/2010/01/12/AR2010011200723.html

Strasbourg has had a tramway system for many years. The first system was abandoned in 1960, the new system dates from 1994, with the latest line added in 2007. It now consists of 5 lignes that inter-connect, then radiate from the city. The tram-train design is an Alstom one {made in Belfort} dating from 2006. Extensions and a new line are planned. The TGV Est (the world's fastest passengers train) connects Strasbourg to Paris in 2h20min, with trains leaving every hour. There are a few daily TGV to Karlsruhe (40min) and Stuttgart (1h15min), as well as frequent regular trains to Colmar (30min), Nancy (1h30min), Metz (1h15min to 1h45min) as well as Luxembourg (2 hours).

In 1308, the Holy Roman Emperor and the Bishop of Strasbourg swapped Molsheim (less than 30 km south-west of Strasbourg on the Wine Road) for Mulhouse. I am not sure what that really means, however it was a Bishop who established the Hapsburg line of Emperors. Never-the-less, Philippe of Souabe destroyed Molsheim in 12th century, and although it was the site of a bishop for 5 centuries it never grew to prominence. The town hall (Alte Metzig) and its square enjoy the Renaissance fountain and one of the most beautiful buildings in town, dating back to 1575 and now a museum. http://www.interfrance.com/en/vin/al_visits.html